How should we write the history of that most fundamental but subjective characteristic of sentience: pain?

The History of Pain

“there was nothing available for mild, systemic pain relief in the eighteenth century” http://t.co/WX7HB35bd4 cc @ArsScripta

Because I am an historian of pain, this excerpt naturally piqued my interest, and I went to examine the entire article. Now, I must confess straight off that I study 19th and early 20th century America. But I spend an awful lot of time interloping in early modern and medieval studies of pain, in part because my work addresses changing ideas of pain in the 19th century. If you really want to understand how ideas about pain change in the modern era, you need to know at least something about the ideas that preceded them.

I was, I confess, quite skeptical about the excerpt, but I wanted to read the article from start to finish. Here is what Ms. Keiter has to say about pain:

Most visitors are mildly alarmed to learn that there was nothing available for mild, systemic pain relief in the eighteenth century. You’d have to come back next century for aspirin. Potent pain management was available via opium latex, often mixed with wine and brandy to make laudanum. In the eighteenth century, small amounts were used as a narcotic, a sedative, a cough suppressant, or to stop up the bowels, but not for headaches.

This is (appropriately) carefully qualified, but even so, I do not think it is quite right. I think there are two points that are really important to clarify when thinking about the use of medicinal therapies for the relief of pain.

First, it has long been argued that professional healers at least as far back as the Middle Ages generally were not focused on alleviating their patients’ pain. Of course, then, as now, pain is a multivalent, rich, and highly ambiguous phenomenon, one that lends easily to metaphor and account in a wide variety of social domain. So, as Esther Cohen shows, most discussions of pain in Western medieval culture tend to appear in theological contexts, whereas early modern and modern expressions of pain often appear more in literary formats. It is actually surprisingly difficult to find people discussing their own phenomenologies of pain specifically in therapeutic contexts. 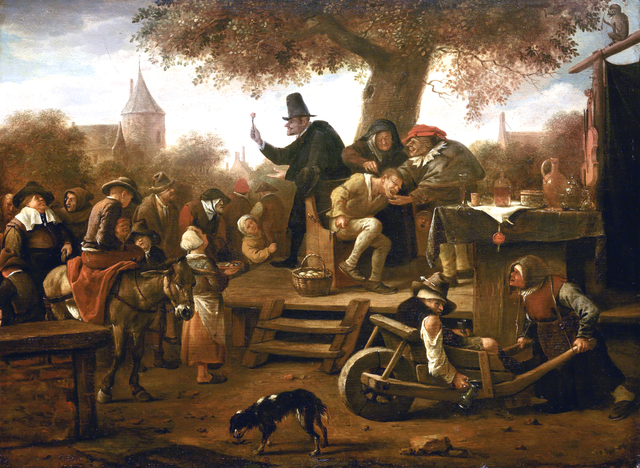 A mid-17th century depiction of a quack doctor and his assistants performing public surgery on an unfortunate young man. Various medicinal liquors and unguents are on display to his right, and a recently treated man is hastily downing a post-op beer while being wheeled away from the scene. Jan Steen, “The Quack Doctor,” c. 1660, Rijksmuseum Amsterdam

But both medievalists and early modernists have set about revising or at least complicating some aspects of the long-held belief that analgesia was not a major priority. Cohen shows beyond doubt in late medieval culture that both lay sufferers and healers focused much on pain, and that there is ample evidence from which to conclude that healers believed in the importance of and strove, where possible, to alleviate their charges’ pain. She notes:

Surcease might not have been the primary goal of physicians, who often considered pain an ancillary phenomenon, but in the end, the recommended cure was meant to also bring freedom from pain. It is important to remember that the great majority of the suffering sick agreed with this point of view. People turned to saints, physicians, or simple healers to have their pain eases, not increased. No matter how vociferous the literature in praise of pain is, it cannot silence the evidence for the basic human search for painlessness.

The evidence, as I understand it, suggests that a medieval emphasis on the redemptive qualities of pain and the difficulties in ameliorating it existed simultaneously along with a fairly intense and significant focus on the need to alleviate it.

On Twitter, historian of medicine Samantha Sandassie noted that one can find many recipes for analgesic remedies in early modern casebooks and treatises:

In a follow-up email, Ms. Sandassie suggests examining primary sources such as The Diary of Elizabeth Freke and The Diary of the Rev. Ralph Josselin.

In early modern contexts, historians such as Lisa Smith and Hannah Newton have documented overt and in some contexts (the pain and suffering of children) even overwhelming medical and healing attention to experiences of pain and the need for its alleviation in illness scenarios.

So, I would want to suggest that we lack a lot of good evidence for the claim that even “mild” and “systemic” pain did not occupy the attention of healers in the West during the 18th c., and we have an increasing historiography suggesting that in fact such pain occupied a good deal of attention both in those who experienced it and in those from whom the pain sufferers sought relief.

The second point I want to make here is a larger claim regarding thinking about how well medicines may have “worked” in past contexts. And here I’d like to emphasize the flip side of Ms. Sandassie’s excellent point above: that while the past may not be incommensurable, it is nevertheless at times so very different from our contemporary world that presentism is an ever-present danger. The past, as L.P. Hartley famously observed, is a foreign country, and sometimes we benefit from treating it that way.

What does it mean for a remedy to “work”? And in answering this question as responsible historians, we cannot supply an answer that provides the criteria for what “works” in our contemporary contexts — and of course there are vibrant debates on exactly what it means for a medicine to “work” even among contemporaries. For example, does a medicine work for the relief of pain if it fails to surpass placebo in a relevant clinical trial? Given that placebos can be quite effective in relieving pain, at least temporarily, do we conclude from the failure that the medicine does not “work”?

In historical context, historians of medicine should IMO aim to answer this question by asking what it meant for people in the periods in which we are interested for a remedy to “work.” Although I am an historian of ideas rather than a social historian, I take the lessons of the New Social Turn seriously. If we really want to gain insight into the phenomenology of pain and illness in the past, we have to inquire as to the social meaning of medicines and remedies in their own contexts.

In his classic 1977 paper “The Therapeutic Revolution: Medicine, Meaning and Social Change in Nineteenth‑Century America,” Charles Rosenberg argued that remedies that “worked” in the early 19th century were those that had visible effects consistent with what one would expect and desire in a humoral system:

The American physician in 1800 had no diagnostic tools beyond his senses and it is hardly surprising that he would find congenial a framework of explanation which emphasized the importance of intake and outgo, of the significance of perspiration, of pulse, or urination and menstruation, of defecation, of the surface eruptions which might accompany fevers or other internal ills. These were phenomena which he as physician, the patient, and the patient’s family could see, evaluate, and scrutinize for clues as to the sick person’s fate.

But if diagnosis for both the physician, the illness sufferer, and the family depended in pertinent part on the visible* signs that signified morbid changes in humoral balance, one would predict that remedies which also operated on this semiotic basis would be so favored. Rosenberg states:

The effectiveness of the system hinged to a significant extent on the fact that all the weapons in the physician’s normal armamentarium worked — “worked,” that is, by providing visible and predictable physiological effects: purges purged, emetics induced vomiting, opium soothed pain and moderated diarrhea. Bleeding, too, seemed obviously to alter the body’s internal balance, as evidenced both by a changed pulse and the very quantity of blood drawn. Blisters and other purposefully induced local irritations certainly produced visible effects — and presumably internal consequences corresponding to their pain and location and to the nature and extent of the matter discharged.

This, then, is the point. It is not productive, in my view, to think about whether or not early 19th c. or 18th c. remedies for pain “worked” by applying present notions of efficacy. Such an approach does not make sense of how those who used and received the remedies for pain would have understood those remedies — it obfuscates both their own phenomenologies of pain and their own efforts and the efforts of their caregivers, intimates, and healers to alleviate that pain. What we would have to do to understand the extent to which 18th c. remedies for pain “worked” is to understand what it meant for such a remedy to work for people of that time.

Rosenberg, of course, emphasizes the importance of understanding “biological and social realities” of therapeutics in early 19th c. America. And in a follow-up Twitter exchange, Benjamin Breen was quick to point out (correctly, I think), that

@prof_goldberg @allenshotwell @medhistorian But on the other hand, the biological efficacy of drugs had a real historical role, no? I.e.

@prof_goldberg @allenshotwell @medhistorian cinchona RX for malaria was major event, precisely because it "worked" where others failed.

This is an important corrective. Acknowledging what anthropologists have termed the “social lives of medicines” is not equivalent to denying “biological reality.” However, I reject a neat distinction between biological action and cultural factors. This is not to deny the reality of the former, but to argue instead that the distinction is not particularly helpful in making sense of the history of medicine.

**Daniel S. Goldberg** is an attorney, a public health ethicist, and an intellectual historian of medicine.