Agostino Brunias, Free Women of Color with their Children and Servants in a West Indian Landscape, late eighteenth century, oil on canvas (detail).

Bellette and Yarico: Working Women in the Colonial West Indies

The French monk, traveler and botanist Jean Baptiste du Tertre repeated the saying “The Indies are a Paradise for Women and a Hell for Men” a number of times in his Histoire Générale des Antilles habitées par les Français. Du Tertre claimed that this was an oft-repeated phrase among French colonists in the West Indies. He quoted it, however, not to reaffirm its truth, but to challenge the notion that this was a place where women had it easy.

Historians know little about European and Indian women in the 17th century Caribbean, mostly because the rugged and war-besieged colonies attracted far more men as settlers. However, Du Tertre and his counterpart in the English Caribbean, Richard Ligon, did write about a few exceptional European and indigenous Caribbean women. Du Tertre wrote that the women transported to the Caribbean at this time had the reputation of being mostly “debauchees.” Like Defoe’s fictional prostitute Moll Flanders, they were women who had better social and economic opportunities in the Americas. Colonial demographic historians Lois Carr & Lorena Walsh have established that women, whether transported for crimes or simply down on their luck, indeed found better work or marriage opportunities in colonial North America. As with Moll, these women showed that if you could brave the sickness, choppy water, and sexual aggressions of sailors, you might be able to make it in the Americas. 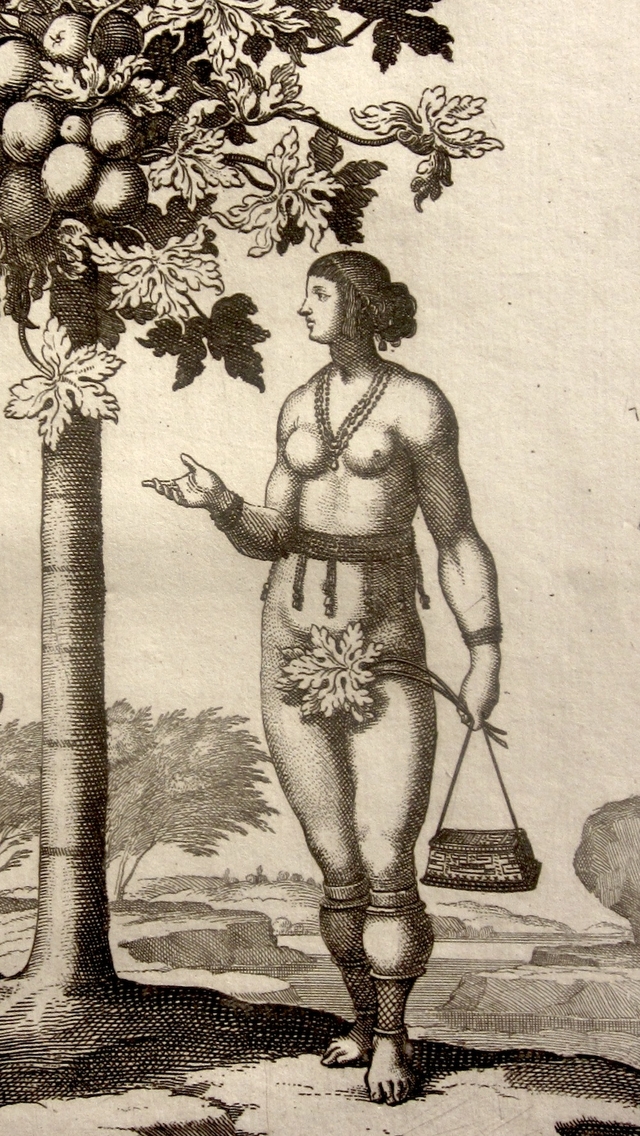 In the mid 17th century, the French Compagnie des Iles de l’Atlantique gathered a ship full of young ladies from Paris, bound for the troubled French & English island of St. Christophe (now St.Kitts). The Governeur de Poincy fell in love with one of them, who Du Tertre described as “the daughter of a rich habitant [of Paris] called Bellette, perfectly beautiful and quite capable of inspiring love: because of this, the eyes of this young person carried their venom to the heart of M. de Poincy.” De Poincy chose to believe that she was of a good house, and not debauched, and so placed her under the care of Madame de la Grange, the wife of the Intendant of the island. The options must have been few for female guardians, as the Intendant was also Governor de Poincy main political rival. It should come as no surprise that it was an ill-fated site for his “too frequent visits” to Bellette. The tongue-wagging of Madame de la Grange “on the pretext of covering the honor of the girl” was heard throughout the island. It was clear that Madame was mostly trying to sully Governor de Poincy’s reputation, but called into question that of the girl in the process. Madame de la Grange clearly exercised her political will in one of the only outlets that genteel women had: the maintenance of reputation thought social control (commonly known as “gossip”).

In the end, Du Poincy punished Madame de la Grange’s slander by forcing her to stay on the Basseterre quarter of the island. We don’t know what happened to poor Bellette: the rest of her story is subsumed in the politics of the island. Du Tertre’s treatment of her however, never presumes that she is indeed as debauched as the island gossips say—or perhaps, Du Tertre believed that her past was not as important in the colonial context.

His sympathetic treatment of Bellette, however, is nothing compared to the defensive posture that Du Tertre strikes on behalf of the indigenous women in the Caribbean. He writes, “the wives of Indians work like slaves under their husbands, who are lazy.” Du Tertre recites a typical day-in-the-life of a Carib woman: after they’ve bathed themselves, they prepare porridge “and after that they are much overworked.” First they comb their husbands hair and braid it, paint their bodies with annatto a reddish dye, make bread, cook what their husbands and children bring from the hunt or fishing, cultivate their gardens, plow the land, cook cassava, make hammocks from cotton, and extract plant oils to use in their husbands hair. Of course, Du Tertre’s accusation that they treat their wives like slaves is unfounded, and likely has more to do with Du Tertre’s European preconception that female labor was tantamount to domestic servility.

Du Tertre also refers to the captive population (mostly Arawak) within Carib communities as “slaves.” However, the work of free women did not differ greatly from that of captive women in Caribbean Indian societies. These captive women, married into neighboring indigenous societies, did not experience slavery in the sense that they were owned, exchanged at will, or used for economic exploitation. Socially, they were not equals with their free counterparts, however, and Du Tertre himself notes that their major markers of status-distinction were that they were not allowed to wear the decorative belts and skirts of the other women. 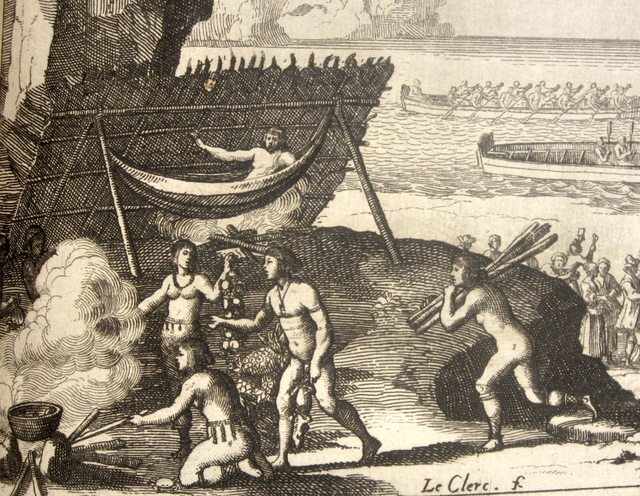 Another engraving from Du Tertre, this one showing the distinction between free Carib women with decorative belts and captive women without. Jean Baptiste du Tertre, Histoire General (Paris, 1667-71), II: 395

Of course, Indian women were also slaves, in the European sense, in the seventeenth-century Caribbean. The most famous story of a female Indian slave comes from Richard Ligon, who was clearly fascinated by a domestic slave named Yarico who worked at the plantation he managed. Ligon, who has roving eye for exotic beauties through his narrative, pornographically introduces Yarico:

we had an Indian woman, a slave in the house, who was of excellent shape and colour, for it was a pure bright bay and colour; small breasts, with the nipples of a porphyrie colour, this woman would not be woo’d by any means to wear Cloaths.

Yarico had lately given birth to the child of an English servant, who had met her when his ship was abandoned on the Guiana coast. Ligon recorded that she saved him from her suspicious “country-men” by keeping him in a cave. Soon, the lovers were discovered by a group of Englishmen, and the Christian took Yarico with him. Alas, “when he came ashoar in the Barbadoes, [he] forgot the kindness of the poor maid, that had ventured her life for his safety, and sold her for a slave, who was as free born as he: and so poor Yarico for her love, lost her liberty.” The tragic story of Inkle (which the English youth was later named) and Yarico, would later gain popularity in the eighteenth century as a rallying cry for abolitionists against taking “free born” Africans in slave raids.

The labor of female African slaves is described in both Du Tertre and Ligon, but they are not the objects of romantic fascination like the corrupted belles of Paris and London, or Yarico. These stories of fallen Eves are in many ways distractions from the largest population of women in the Caribbean: African slaves. The colorful story of Yarico should not lead us to believe that Indian women in general had a special or privileged position when they were enslaved in European colonies. The plantation system was a brutal equalizer for those held in bondage—the relentless cutting and milling of sugar cane or constant pounding of cassava pone for hundreds of laboring people did not make great exceptions of women—with or without venomous eyes or porphyry-colored nipples.

**Carolyn Arena** is a PhD candidate in the department of history at Columbia University.