American Panopticon: How a Small Town Foreshadowed the Surveillance State

What is a Panopticon? A prison with a central tower that can peer into every cell. An all-seeing eye that cannot itself be seen. The epitome of Enlightenment and a metaphor for modernity. A conversation piece at certain kinds of parties.

But why did the residents of sleepy Lowville, New York, way upstate in the western foothills of the Adirondacks, build the real thing, circa 1825? At that time Lowville was basically an administrative unit, not an actual town. Settled only a generation earlier by New England migrants, it was a relatively isolated agricultural community. It was provincial, to say the least, and its residents appear never to have heard of Jeremy Bentham, the great utilitarian social theorist and progenitor of the Panopticon idea.

Yet somehow the idea made its way there, no mistaking it. Lowville village, still two decades away from incorporation, had no bank or fire company, but it did have an academy, and under the leadership of Principal Stephen W. Taylor, the school had grown enough by 1824 to need a larger building. Taylor’s plan “consisted in placing the pupils in small separate apartments, open on one side, so that every one, both in the main floor and in the gallery was under the eye of the teacher at his stand, while no one could see any other of the students.” In short, a Panopticon. 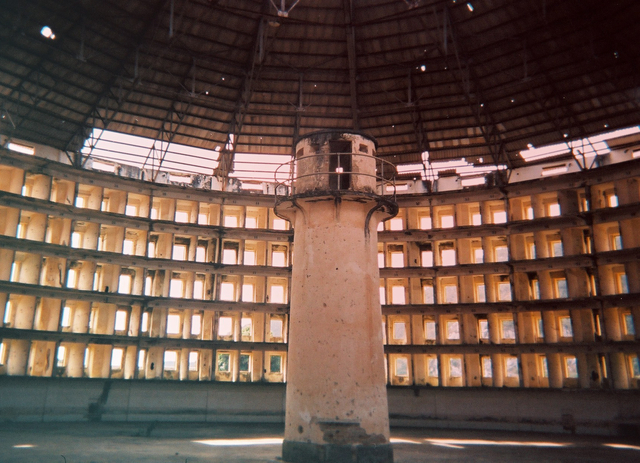 Taylor—once described as the possessor of “a huge mass of brains”—thought the scheme so original that he applied for a patent. The authorities raised questions “inasmuch as an arrangement somewhat similar had been adopted in prisons in England.” But in the end, “the purposes to be accomplished were regarded as so dissimilar” that the patent was issued. As it turns out, Bentham had already written that panoptic architecture applied to a wide range of institutions. In Chrestomathia (1816), he applied the concept specifically to education. So it seems that these Americans were only dimly aware of who he was, if at all.

The school’s architect, Philip Hooker, may have known better, though. A decade or so earlier he had designed the Albany jail so that a single guard could survey all of its cells simply by swiveling in place. “The octagonal saloon,” he explained, “has a communication with each room in each story.” It seems odd that this “profoundly conservative architect” would draw up something as manifestly visionary as a Panopticon. At just this time Bentham himself was struggling to convince British politicians of the plan’s workability. But actually, Hooker’s conservatism seems to have consisted mostly of neo-classicism, which comports just fine with Bentham’s supreme rationality, though there is no evidence that he actually knew who Bentham was. In any case, he had no trouble collaborating with Taylor’s “singularly mathematical and methodical mind.”

Hooker and Taylor redesigned Lowville Academy as a twelve-sided, two-story brick structure. The main floor, twenty-three feet high and seventy feet in diameter, must have been an immense open space of something like 3,000 square feet. The floor plan shows “a series of ‘stalls’ or partitions” along the exterior wall and interior benches arranged in a semi-circle for class recitations. Near the center is the principal’s “high seat or throne overlooking the whole situation.” The attic story served as a girls’ department. The overlay of dotted lines indicates the original plan for student bedrooms, but in fact it was “constructed upon the solitary-cell principle . . . it being apparently thought that the young ladies needed watching while at their studies, as much as the young men.”

The kids hated it. There’s no direct testimony, but retrospective accounts unanimously stress the students’ objections to “this close espionage.” That word, which recurred in several versions of the story, is only fitting. Bentham addressed its use in The Rationale of Reward, a work that tries to systematically elucidate a philosophy of social engineering by means of carrots and sticks. In one chapter, Bentham notes the popular distaste for rewarding informants because it “introduces into society a system of espionage.” This objection he waves off breezily. It is a case merely of stigma, he argues, and so “let us substitute the word inspection, which is unconnected with the same prejudice.” As long as “inspection” serves “the preservation of the public tranquility” rather than “an oppressive system of police,” all is well. It must have been these kinds of passages that led John Stuart Mill to write of Bentham, in an otherwise laudatory reflection, “We must not look for subtlety, or the power of recondite analysis, among his intellectual characteristics. In the former quality, few great thinkers have ever been so deficient.”

Besides student mutiny, the Lowville Panopticon suffered from the mundane problem of shoddy construction. Its interior produced cascading echoes that made communication difficult. It could never be properly heated, the ground floor always too cold, the attic always too hot. And its foundation proved defective so that the walls had to be reinforced from outside.

At last the whole structure became unsafe. It was taken down in 1836. Years before that, Taylor had resigned in humiliation. 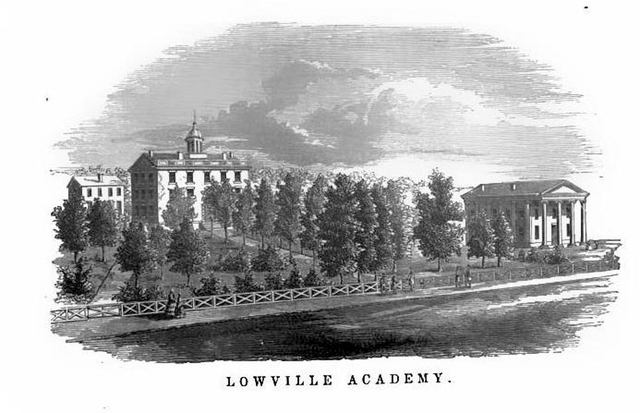 Lowville Academy, circa 1859, after Taylor’s Panopticon had been demolished Hough, History of Lewis County

We know all this because of Franklin B. Hough, a local historian and academy trustee. As far as I can tell, Hough is the only direct source concerning the episode. He seems to have regarded it as worthy of record precisely because of its ridiculousness. It is all the more ridiculous today, when Michel Foucault’s take on the Benthamite Panopticon has become a cliché of critical social theory. For Foucault, the Panopticon was about much more than sight lines. It represented the general disciplinary logic at the heart of all modern social institutions. In schools, hospitals, armies and, of course, in prisons, the same principle of surveillance reordered all it encountered, even the human body.

“Bentham is more important for the understanding of our society than Kant and Hegel,” Foucault said. The most sinister thing about surveillance is that, merely to observe and assess, it must establish standards, which is to say it must arbitrarily assign values of normalcy to some aspects of human conduct in order to gauge the deviation of others. Watching means prescribing. As the process extends into each facet of life, everything becomes the object of a totalizing “gaze,” a kind of visual tractor beam that bends people to its standards just by looking at them. It’s an intensely paranoid vision—but as they say, just because you’re paranoid doesn’t mean they’re not after you.

Hough’s use of the word “espionage” potentially conjures up all of this. To the extent that it does, it confirms Foucault’s point that surveillance inherently does violence to the diversity and heterogeneity of human life. But on the other hand, Hough’s story is positively quaint: the kids rebelled, and they won. It’s Ferris Bueller’s Day Off meets Red Dawn. Even the edifice itself, the very structure of surveillance, was faulty. Next to the pathetic failure of this real-life Panopticon, Foucault’s vision seems almost silly.

Hough’s biography adds an ironic coda. An inveterate observer and categorizer, Hough was an architect of Foucaultian modernity. He was a doctor, a statistician, and a government bureaucrat. He catalogued plants, compiled meteorological data, and supervised two New York state censuses. His numerous county histories helped codify the genre’s triumphalist conventions. He was a quintessential practitioner of seeing like a state.

Somehow he also found time to be the “father of American forestry.” In this capacity he exemplified the kind of figure that environmentalists regard with profound ambivalence: sensitive to the complexities of the natural world, but a technocratic modernizer all the same. In fact, he symbolizes many of the ambiguities of the modernizing sensibility, which is typically as romantic as it is calculating. As chief of the Department of Agriculture’s Division of Forestry in the 1880s, Hough once wrote a pamphlet recommending the planting of trees in school yards.

Three or four generations down the line, somewhere in America, is it not inevitable that some truant teen is lighting a joint behind one of these trees, shielded from observation?

Franklin B. Hough, History of Lewis County, in the State of New York (Albany: Munsell & Rowland, 1860).

**Ariel Ron** is a historian of nineteenth-century American political economy.