How a 1908 Anti-Suffrage Cartoon Became an Internet Sensation

In early 1908, a magazine illustrator named Harry Grant Dart settled down to work on his new assignment: parodying the women’s suffrage movement for the magazine Puck.

Dart was a cartoonist from the golden age of newspaper illustration, when photographs were still rare in daily periodicals and innovative comics like Little Nemo in Slumberland and Krazy Kat were winning huge audiences. Dart’s specialty was slickly-executed visions of the future, particularly shiny airships like the ones featured in his comic strip The Explorigators, or this cover for the magazine The All-Story: 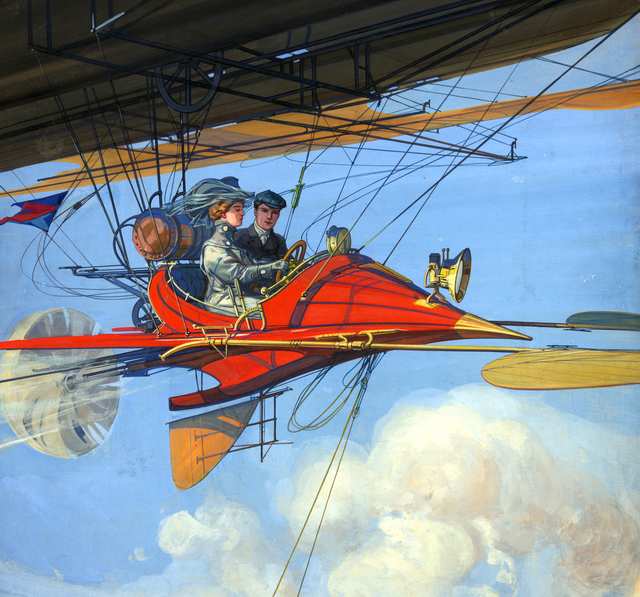 For his Puck assignment, however, Dart was inspired by a different vision of the future: a parodic, misogynistic one that imagined a world where women could vote and, consequently, had taken the traditional place of men as drinking, smoking, gambling barflies. 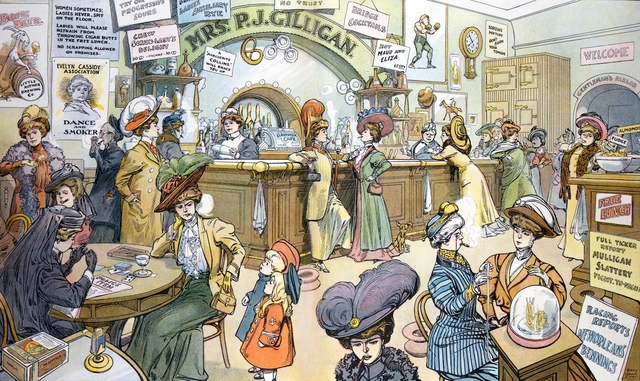 Editor’s note: You can now buy Dart’s image as a poster at our online store.

Dart’s image was intended to provoke indignation and/or derision among Puck’s overwhelmingly male audience. In the 2010s, however, it takes on an utterly different valence. As multitudes of Twitter commenters exclaimed when it surfaced last year, now Dart’s nightmare bar just looks like a fun place to hang out:

This picture was intended to illustrate the "horrors" of suffrage, but damn if that doesn't look like an awesome bar pic.twitter.com/5Ch5k8uiBc

When we tweeted about it back in November, responders on Twitter especially liked the free fudge:

And remarked on the copious smoking:

@ejacqui @appendixjournal @SamSykesSwears If someone opened this as a bar (with electronic cigs) it would be a giant success.

Dart’s work also went viral when we posted it to our Tumblr, getting featured on Tumblr Radar and garnering around 38,000 notes and counting.

It seems safe to say that the image hit a nerve, playing to the internet’s love of retro nostalgia and old-timey aesthetics. It also allowed commentators to poke fun at the distance between 2013 and 1908, when Dart’s bar would presumably have seemed laughable at best, nightmarish at worst to Puck readers. A short piece on female suffrage that appeared in a 1909 issue of Puck under the harrumphing title “Votes for Women!” makes the stakes clear:

Hitherto a woman could by no means get into a real fight with a real man except she were married to him; but henceforth single women will labor under no such disability. They have only to go in for suffrage in the English manner, and straightway their hads are blithely busy doing battle against all manner of foes in trousers—policemen with clubs, soldiery, masculinity of every sort.

The fact seems to be that privilege is doomed, matrimonial privilege with the rest. 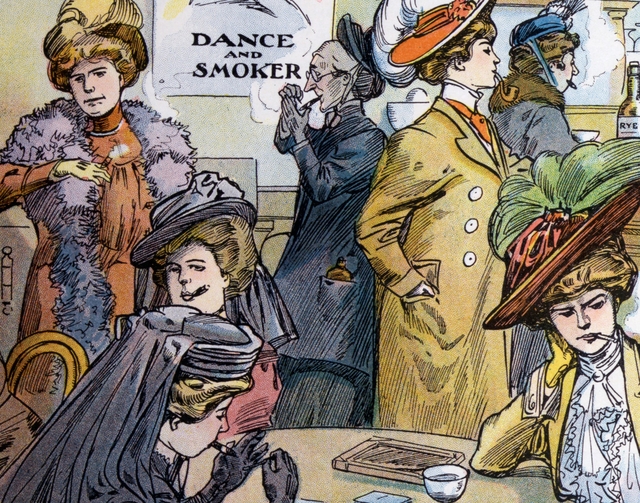 Dart seems to have been fascinated by the phenomenon of women smoking, with almost every character in the image sporting a cigar, cigarette or pipe (or standing by a spittoon). Tobacco was still largely a man’s world in 1908, but things were changing swiftly with the advent of mass-marketed cigarette brands. Library of Congress 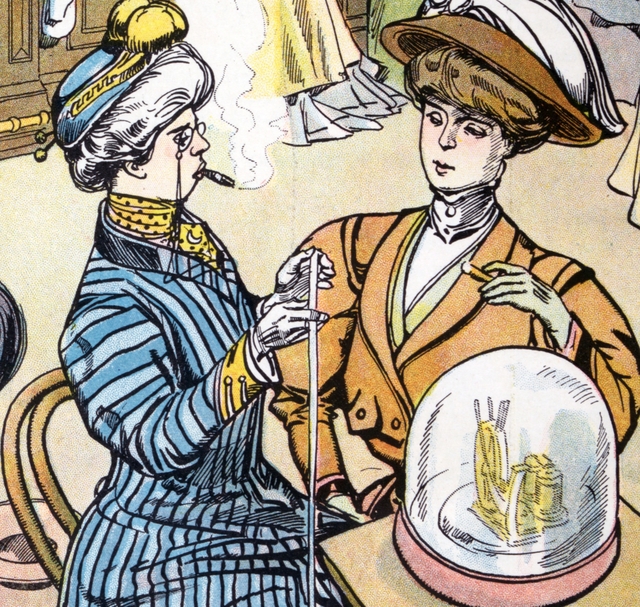 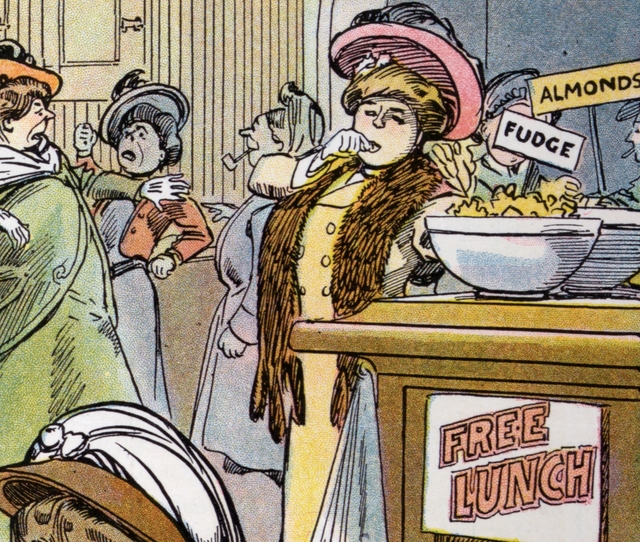 A dark future of complimentary fudge and almonds. Library of Congress

This last detail is one of the oddest—why in the world would Dart have chosen something as universally pleasant as a bar giving away free fudge and almonds in his depiction of the horrors of suffrage? The answer, I think, has to do with the intersection between the temperance and suffrage movements. Saloons at the turn of the last century often offered complimentary buffets with the purchase of a drink (hence the still-common expression “There’s no such things as a free lunch.”) But many anti-alcohol activists disapproved of the practice because it tended to encourage unemployed workers to gather in bars. A temperance writer in 1874 railed against the practice:

In the cities, there are prominent rooms on fashionable streets that hold out the sign “Free Lunch.” Does it mean that some [philanthropist] … has gone systematically to work setting out tables … placing about them a score of the most beautiful and winning young ladies… hiring a band of music? Ah, no! … there are men who do all this in order to hide the main feature of their peculiar institution. Out of sight is a well-filled bar, which is the centre about which all these other things are made to revolve.

Dart was by no means the only artist from this period to envision the futuristic consequences of the women’s movement. In our upcoming Summer 2014 issue “Futures of the Past,” we’ll feature more on the topic, including explanations of related images like this prediction of a wedding in the year 2001: 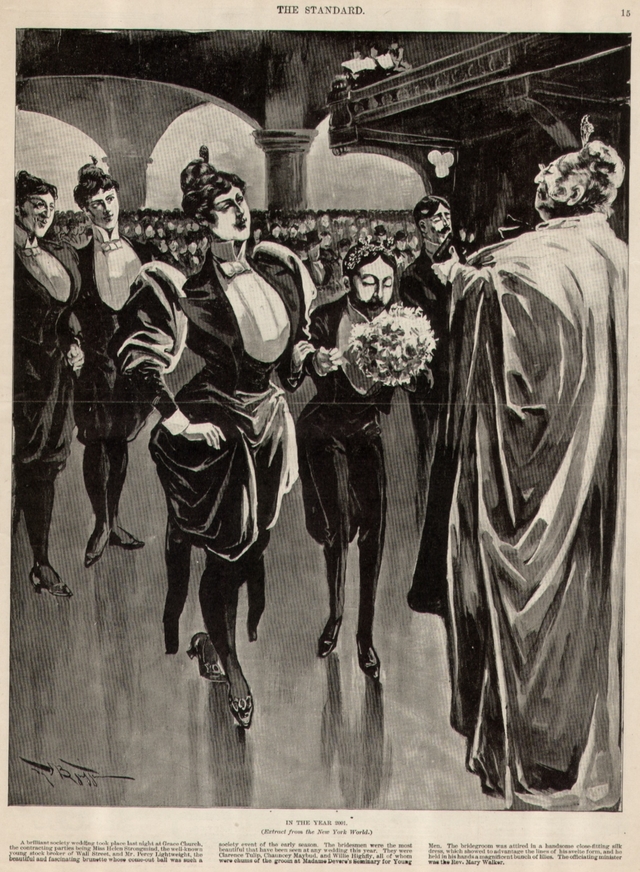 For now, though, you can check out a much more high resolution version of Dart’s image at the official Appendix store.