Before the wheelie became a staple of 20th century childhood, it was the pet trick of a hot-headed “fancy rider” named Canary.

The Victorian Inventor of the Wheelie

A hundred years before the rise of extreme sports, stunt bikers took big risks and drew bigger crowds. Although he’s largely forgotten today, Daniel J. Canary was one of the best.

In 1897, one of the top stunt bicyclists in the United States called Canary “the father of us all.” Canary performed amazing feats on the high-wheel, but when he got his hands on the newly-invented “safety bicycle,” the father of the bikes we know today, he did even more: he invented the wheelie.

“Canary at his tricks” portrayed on the cover of the sheet music for a song called “The Cycle Man,” 1891. Library of Congress

Long before he achieved the first wheelie, Daniel Canary rode what was called the ordinary bike, otherwise known as the old-fashioned or penny-farthing bike. Bikes in this style were called “ordinaries” in the 1880s and ’90s because they were the standard ride, but Daniel J. Canary made them extraordinary.

In 1879, Canary was working as a telegraph messenger in Meriden, Connecticut. He purchased his first bike when he was a newsboy because it was too hard for the previous owner to ride, but Canary was undeterred. He quickly became a local sensation, developing new tricks and making a name for himself in races. He started offering exhibitions in skating rinks and before long his fame grew far beyond Connecticut.

By December, 1883, the Washington Evening Star was lauding Canary as “the champion of the world… pre-eminent as a performer of wonderful feats.” He could ride an ordinary with folded arms and the miniscule back wheel lifted in the air, the paper reported. He could set it upside down and then flip it up, mounting it at the same time. He could even ride on the big front wheel solo, essentially transforming the bike into an enormous unicycle.

By the next year, he was already writing to his hometown paper about mishaps in Paris, which was then a hotbed of mechanical experimentation. Immediately before attempting to ride his bicycle on a stack of tables and chairs at a stage show in the French capital, he realized he didn’t know how to communicate with the stage manager. He was forced to gesture wildly while still on his bike, and the entire audience rushed the stage.

1884 was a banner year for Canary. His most famous stunt to date took place that spring at the U.S. Capitol building. On May 20th, 1884, he rode down the steps of the Capitol on an ordinary bicycle (a feat that wasn’t only difficult, but incredibly dangerous). That created enough of a story that two papers covered his plan to ride down the East side steps on just a front wheel, but the police stopped him before he could attempt the feat. Nonetheless, Canary and other “fancy riders” stuck around to perform “a number of difficult and fancy maneuvers.” 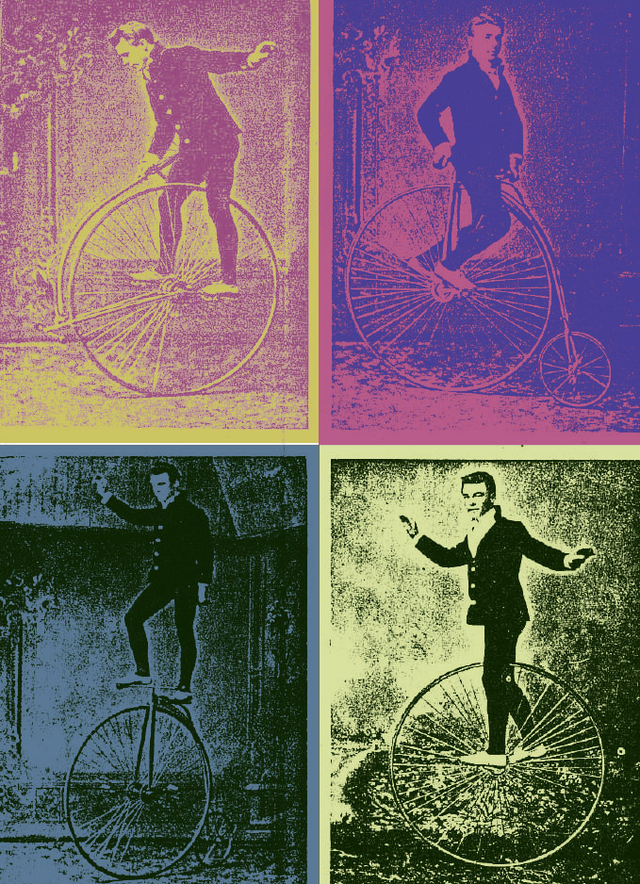 Canary followed that with a public relations coup, challenging Chicago bicyclist Warren Wood to a face-off. He penned a public letter in the Chicago Tribune, throwing down the gauntlet. Wood accepted (he had challenged Canary before) and the two met in a public hall for a fancy-riding competition. News traveled as far as New York when Canary won the challenge.

From there, Canary’s fame only grew. But his greatest accomplishment hasn’t been fully understood until today.

Canary wasn’t bound to the ordinary bike. Safety bikes (the type of bike we use today) were still uncomfortable—Canary described one of the first chain bikes as like “riding over a corduroy road”—but they were getting better thanks to improvements in form and tires. So when Canary returned from a European tour in 1890, he didn’t just adapt to the safety bike. He excelled.

As the Tribune reports, Canary tried out the bike at Niagara Falls and “performed the feat, then regarded as impossible, of riding on the rear wheel, with the front wheel elevated. Mr. Canary believes he was the first rider to perform the feat.” In other words, Dan Canary invented the wheelie.

A few things make Canary’s claim plausible. First, Canary was widely acknowledged as the foremost trick rider of his time. Second, the safety bike was almost brand new, and earlier bikes were probably too heavy to wheelie because of their wooden frames and metal tires. Finally, the same article mentions the Capitol stunt that the police canceled. 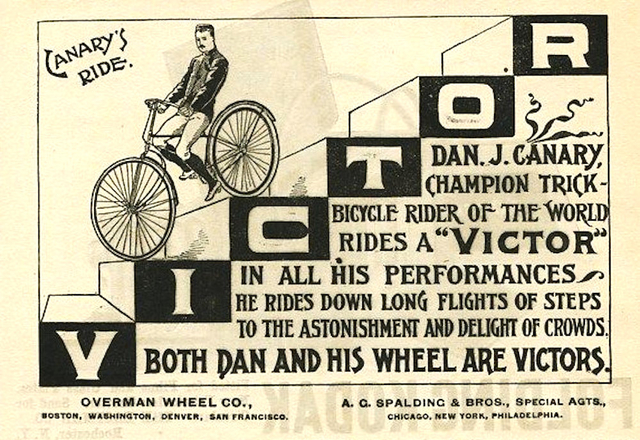 Canary’s career took him all around the world and across the country. Unconfirmed stunts include a ride around a loop in Madison Square Garden, as well as another tumble down the stairs. In 1894, he impressed San Franciscans by riding down three flights of stairs without handlebars and pedals, balancing on just one wheel. The same year, Sacramento bike fans were treated to an exhibition in fancy and trick riding while others were racing. In Los Angeles, he made his name as “the noted trick bicycle rider of Chicago.”

The same bravery that led him to switch from the ordinary to the safety took him into other sports. As his trick riding career died down, in 1900 he appeared above the results of a bicycle match for tying in a golf game, and he later won another club tournament. In 1905, it even seemed like he was on the verge of a new career when he told The Motor Way he was interested in cars and was going to “start at the racing game and I am going at it for all I am worth.”

He started one of Chicago’s first cab companies, the Canary Cab Company, and became a local authority on the new invention. In 1909, he sold his stake and, by all reports, became quite wealthy. In 1917, he was so rich that he bought a house in St. Petersburg Florida without even seeing it first. Eventually, he moved to Los Angeles and probably died around died around 1925. By then, old-fashioned bicycle riders like Dan Canary had been forgotten.

But it’s better to remember an earlier moment in his life, when bicycle riders of old were already nostalgia. In 1911, the Chicago Tribune reported on a reunion of the “Old Time Wheelsmen.” Apparently, a few of the old-timers tried out their stunts but “found to their sorrow they had lost the knack of handling the machine.”

Dan Canary wasn’t one of them. 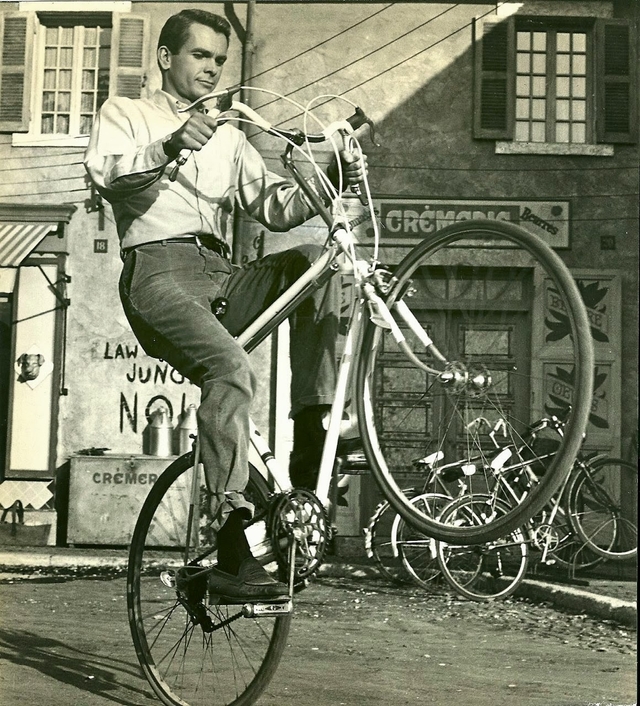 A version of this post originally appeared at Trivia Happy here.

**Phil Edwards** is a writer based in Chicago.