Reconsider the lobster: how the humble crustacean transformed from a food of the premodern poor to a prize of gourmets.

Lobsters in the Archive

Thence with mighty content homeward, and in my way at the Stockes did buy a couple of lobsters, and so home to dinner, where I find my wife and father had dined, and were going out to Hales’s to sit there, so Balty and I alone to dinner, and in the middle of my grace, praying for a blessing upon (these his good creatures), my mind fell upon my lobsters: upon which I cried, Odd zooks! and Balty looked upon me like a man at a losse what I meant, thinking at first that I meant only that I had said the grace after meat instead of that before meat. But then I cried, what is become of my lobsters? Whereupon he run out of doors to overtake the coach, but could not, so came back again, and mighty merry at dinner to thinke of my surprize.

On an inauspicious Wednesday in 1660, Samuel Pepys left his lobsters in the back of a London taxi. According to his diary, he often purchased lobsters from fish markets in the city and brought them home for dinner. He also ate lobster at the homes of friends, served them at an elaborate dinner party, consumed them in pubs with prawns and ale, and indulged in lobster “with his mistress.” Eating lobster was as much a part of this London bureaucrat’s daily life as singing music with friends, buying a book, or seeing a play.

Of course, Pepys fancied himself an epicurean with great taste in food and drink. He was prone to sing the joys of excess in his gustatory feats. The online Pepys “encyclopedia” gathers his many references to food and drink in an impressive searchable list. But lobsters also lurk in the corners of many other early modern documents: their name is defined in multilingual dictionaries, mentioned in descriptions of Virginia and the East Indies, numbered among delicacies in chronicle accounts of banquets, and cataloged among beasts of sea and land. The lobster’s notable red hue when boiled is used to describe flushed faces. “Lobster” is the favored insult of a surly sea captain in an anonymous play.

For an gourmand like Pepys, lobster was both notable and quotidian. Pepys was able to purchase fresh lobster in London markets because earlier in the century English fishing fleets had adopted the Dutch practice of using “smacks,” or well vessels, to keep fish alive while en route from the sea to the market. It was a meal worth mentioning, like a tasty dish of rabbit or oysters, but a loss to leave such delicious shellfish in a hired coach. The crustacean’s purported effect as an aphrodisiac was its most exotic property and perhaps inspired Pepys to couple lobster and lust on at least one occasion.

Scuttling along the bottom of the Atlantic, the lobster was not so much a trans-Atlantic voyager during this age of seafaring exploration as a trans-Atlantic constant: Lobsters were always in motion under the deeps.

Lobster sustained indigenous populations from the Americas to the antipodes long before the arrival of Europeans on their shores. While lobster could be consumed fresh, it was commonly smoked or salted for later consumption. Tupaia, Captain Cook’s Polynesian navigator, sketched a Maori man exchanging a large, live spiny lobster for a piece of cloth when the Endeavour landed in New Zealand in 1769. 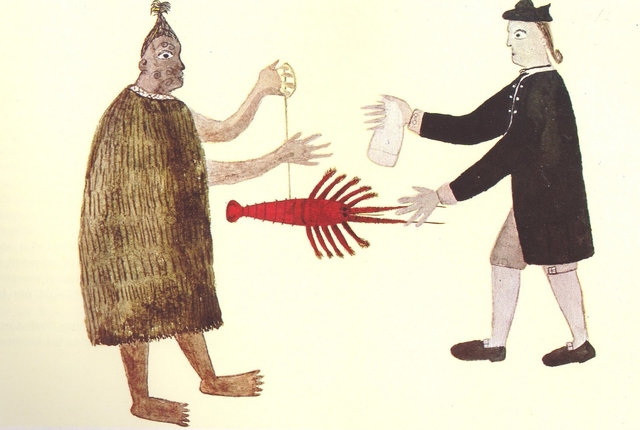 We are now in a new age of lobster abundance, and accordingly, an awful lot of ink has been spilled over the lobster. As warming oceans drive huge lobster harvests, it seems like I’m reading about lobster everywhere. Elisabeth Townsend’s Lobster: A Global History (2011) devotes an entire chapter to the future of the lobster. In the July 2014 issue of Vogue Tamar Adler’s article “Surf and Turf” documents a series of lobster meals consumed on the coast of Maine. The Spring, 2014 “All You Can Eat Issue” of Lucky Peach features lobster-driven fiction by Kevin Moffett.

Perhaps most memorably, David Foster Wallace considered the lobster’s capacity to feel pain in his iconic Gourmet essay in 2004. But Wallace also connected the scientific and ethical question driving his inquiry to the idea of the “gourmet.” Wallace writes, “After all, isn’t being extra aware and attentive and thoughtful about one’s food and its overall context part of what distinguishes a real gourmet? Or is all the gourmet’s extra attention and sensibility just supposed to be sensuous? Is it really all just a matter of taste and presentation?” Likewise, the history of the lobster’s ubiquity in the world’s oceans is a fundamental element of when, why, and how we have consumed lobsters in the past and will consume them in the future.

Perhaps it comes as no surprise that there are many recipes for lobster in the archive. Recipes for cooking the common crustacean abound from simple preparations for roasting, boiling, and preserving to using lobster eggs in fish sauces and particularly surrealist preparations. Indeed, a lobster recipe I found while surveying early modern recipe books at the University of Pennsylvania’s Kislak Center for Special Collections, Rare Books, and Manuscripts forced me to consider the lobster anew.

The recipes for Roast Lobster and an accompanying sauce transcribed below are from MS LJS 165, an English collection of culinary, medicinal, and household recipes compiled between 1690 and 1802. This recipe is an interesting hybrid of indigenous, colonial, British, and French methods for preparing lobster.

Native American tribes, like the Algonquin, often baked or roasted seafood and these “clambakes” usually included lobster. British colonials followed suit and roasted lobsters in their new settlements. They also adopted indigenous methods for salting and smoking lobster, however disenchanted they were with the appearance and taste of this abundant shellfish. In eighteenth-century England lobsters were roasted in the fire or potted in oil and preserved. By contrast, seventeenth-century French recipes instruct cooks to boil lobster in seasoned bouillon or season it with creamy sauces. Pepys never describes how, exactly, his lobsters were prepared in his diary. He may have eaten something rather like the hybrid lobster preparation included in MS LJS 165.

To Roast a Lobster
Take Lobsters alive tye them to a spitt with tap[e] when they begin to be hott baste them with white wine Vinegar, & salt mixt, when turn red baste them with butter very well & still as they dry baste them as l[on]g as they roste, you may know when enough by the gravy. when leaves dropping they are enough
sawce see below
Sawce for Lobsters
1/2 pint white wine or to your quantity put in some swe[et] hearbes 2 anchovis a litle horseredish a litle lemonpeal & onion boyle it well then take out the time & oinion & put some grated nuttmeg the gravy of the Lobsters and then boyle it again & stirr in a good pees of butter, if they are large they will be 2 howres aroasting.

Tied to a stake, the lobsters are roasted over a fire and basted with butter for approximately two hours. An accompanying white wine and butter sauce, seasoned with anchovies, horseradish, lemon, onion, and nutmeg, complements the rich flavor of the lobster itself. When I write about historical recipes for my Cooking in the Archives project, I’ve cooked them, usually with my collaborator Alyssa Connell by my side. But I’ve hesitated to try roasting a lobster according to the MS LJS 165 method. Initially, I attributed this reluctance to my recent move from the east coast to the west and the difficulties of sourcing live seafood in a new locale. Yet I’ve come to think that my reluctance is more about the idea of tying a living thing to a stake.

The pot of boiling water or the quick hand with a knife are far more appealing regardless of their ambiguous ethics. I fear that like Pepys I would end up yelling “Odd zooks!” and find myself at a loss as lobsters crawled across my counters. Instead, I suspect that I will stay attentive to lobsters and their contexts, to paraphrase David Foster Wallace, as I read in the archive of historical recipes. There are certainly more lobsters lurking there.