When we were putting the first issue of The Appendix together, there was a section that I didn’t have to fight too hard for: our Not-So-Funny Pages—still the working title—a department in the rear of each issue where we would share new takes on history, in sequential art form.

In a word, Comics! It’s become almost a cliché to say so, but comics have experienced a Renaissance over the last three decades. From critical acclaim, to box-office domination by its superheroes, to fertile artistic experimentation, comics and their slightly sterner younger sibling, graphic novels, have been hard to ignore, especially as they’ve turned their gaze to more non-fiction material, like history. First-person outsider comics have been around for nearly a half-century now, but the last two decades have seen an ‘I’ that creates comics with a more journalistic and more historical view. Joe Sacco reported, wrote, and drew Palestine, a hard, beautiful, and sad take on a conflict that has stymied the best magazine reporters. In 2003, Chester Brown contributed a strange, even funny historical biography of Louis Riel and the Métis leader’s 19th century rebellion against the Canadian government. Jim Ottaviani continues to write terrific graphic novels on the history of science, most recently offering a biography of the brilliant bongo-playing physicist Richard Feynman. And from the goofier side of the fence, there are the webcomics of Kate Beaton, consistently hilarious at tweaking history’s foibles, whether it’s what Richard III was really like, or how not to make a movie about the Middle Ages.

For our first issue, we’ve been able to excerpt a section from one very talented graphic novelist’s most recent work, but I wanted to share a panel from a brand new comic we commissioned, from Andrew Cohen, an artist in Washington, D.C., who recently contributed to the very cool compendium of little-known capitol lore, District Comics. Andrew and I had two years of being smart alecks together in our high school’s American history class. Through we decided against teaming up for our long-planned Jefferson vs. T. Roosevelt zombie statue comic, Andrew very kindly made us a comic on a 16th century shipwreck in Southeast Asia instead. Here’s a taste: 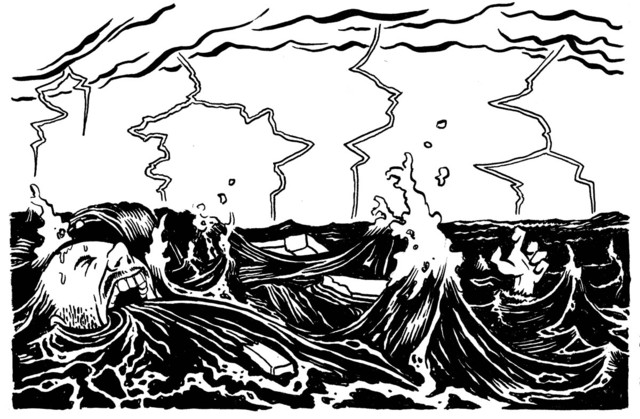 Panel from Andrew Cohen’s first comic for The Appendix, 2012.