For the Open Source feature of its first issue, The Appendix ran an 1866 prophecy of one ‘Benjamin the Anti-Christ,’ a San Francisco prophet who foresaw earthquakes, international war, and brain paralisis [sic]. The Smithsonian’s archives, where the prophecy was found, contained no accompanying information. I cross-posted it on Slate’s excellent historical blog, The Vault, and asked readers to lend a hand—which is when one helpful reader (who has asked to remain anonymous) got involved.

Our reader started with the 1867 copyright registration of the prophecy, and found in the Sacramento Daily Union newspaper that a book by an unnamed San Francisco author called “Prophecies of Benjamin, the True and Real Antichrist” was copyrighted on 25 July 1867. “Benjamin prophecies San Francisco will become a complete slaughter-house within seventeen months; Los Angles will be destroyed, etc.; but he spares Sacramento,” the newspaper gloated. 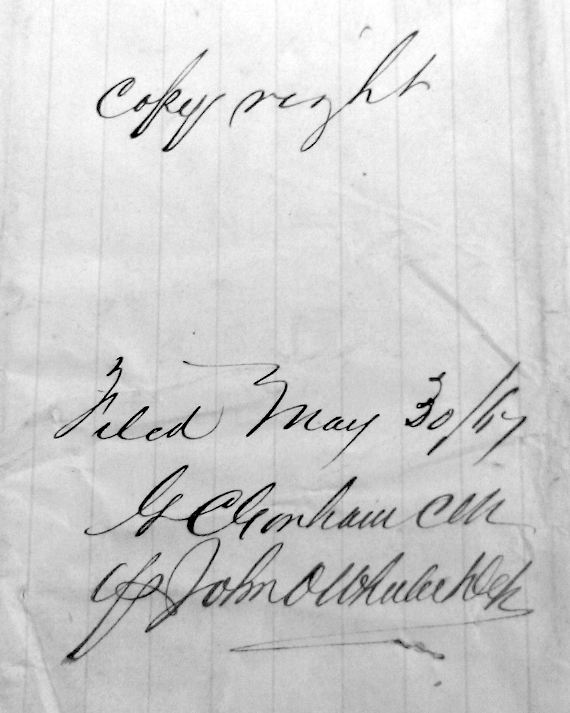 He then examined the above detail that we had published, from the prophecy’s exterior. We at The Appendix had read the two signatures as Chen han-sen, and John O Wheeleeock. Our reader had a sharper eye and read the first name as G. C. Gorham clk—meaning he was a clerk. “A quick Google suggests that there was a controversial politician named G. C. Gorham in San Francisco in that era,” he wrote us by email. “The other signature appears to be that of John O. Wheeler, possibly the one listed in the 1880 Census of Los Angeles as a Supreme Court clerk.”

“So was either of these guys Benjamin the Antichrist?” our anonymous reader asked us waggishly. “Or were they just his earthly representatives?”

It’s a terrific question. Copyrighting a prophecy seems like an extraordinarily American thing to do. The copyright suggests that someone was trying to profit from the tale, real or not. Was it Gorham and Wheeler?

Could have been. I did some poking around on the internet this weekend and found that if G. C. Gorham was George Congdon Gorham then he perhaps had the profile, if not the motive. He was a Connecticut-born 49er Republican California law clerk, railroad co-owner, and newspaper man— editor at the Sacramento Daily Standard and the San Francisco Daily Nation. In 1867, he ran for governor in California and lost in part because he took a stand against anti-Chinese nativist violence and sentiment. The political cartoon below pillories Gorham and the Republican party’s platform of suffrage for non-whites, taking a series of deeply racist shots at blacks, Chinese and Indians along the way. 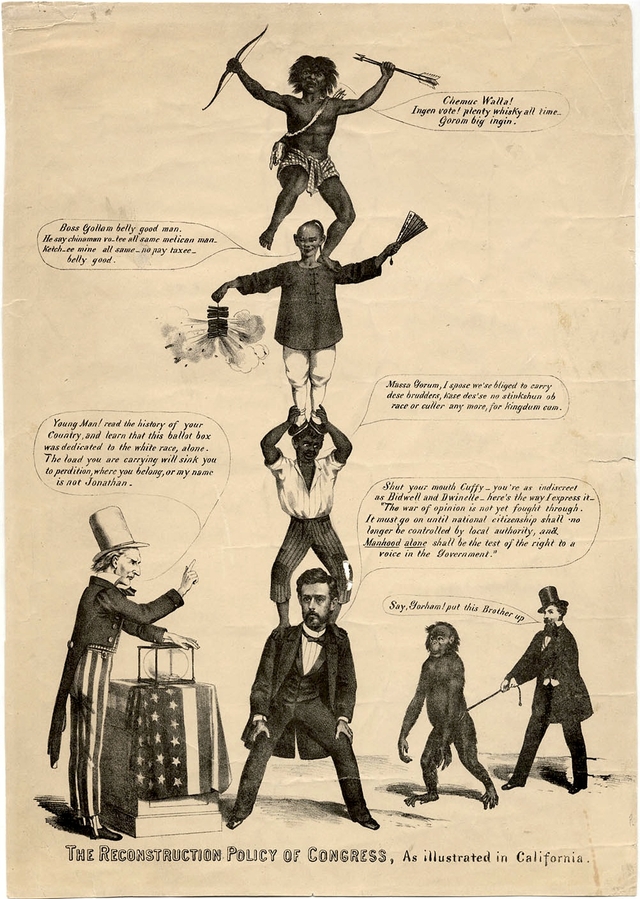 “The reconstruction policy of Congress, as illustrated in California,” political cartoon featuring George C. Gorham, 1867. Courtesy of the Library of Congress

Gorham’s career in “wire-pulling and political trickery” then took him to Washington, D.C. where he became the Secretary of the United States Senate during Reconstruction. He later returned to journalism and writing.

John O. Wheeler was likely John Ozias Wheeler, “a merchant, court clerk, government employee, city council member and newspaper editor” in California during the same era, according to Wikipedia. From 1860 to 1867 he was a clerk in the federal justice system. He clerked in Monterey until 1866, “then moved to San Francisco, where, as chief deputy of George C. Gorham, he conducted the office of clerk of the consolidated district until the close of the canvass made by that gentleman for Governor in 1867,” reported 1889’s An Illustrated History of Los Angeles County.

Benjamin’s more ghostly absence from the historical record, and Gorham and Wheeler’s presence, and collusion in Gorham’s gubernatorial campaign, suggests their hand, and not Benjamin’s. Additionally, the copyright was filed during the campaign. Could the prophecy could be an example of that wonderful nineteenth century literary genre, the hoax? Was it a money-making joke ginned up while Gorham ran for office? Was it more serious, an attempt at fear-mongering? A satire of some forgotten political jingoistic adversary named Benjamin? An attempt to distract from the racism coming Gorham’s way? Or was it fabrication by Democrats, intended to embarrass Gorham by associating him with ‘Benjamin’?

No copies of Benjamin the Anti-Christ exist on Worldcat, let alone the wider internet—which suggests that though it was copyrighted, it was never published. Regardless, it’s possible that Gorham then brought the ‘Benjamin’ text with him when he went to Washington and dropped it off at the Smithsonian. Or that an opponent sent it that way to embarrass him?

Some readers at Slate wondered what was so mysterious about the document, dismissing it as the ravings of an apocalyptic kook. Our reader also wasn’t sure, but that was because he was able to decipher what we couldn’t: two important names that hint at an iceberg of California political and publishing history, racism, back room jokes and tall tales, and jingoistic doomsday ends that moved back out East and were filed as a curiosity in an archive in the Smithsonian. Another example of how the real, the manipulated, the messy, the vile, the concocted, could become yet another mysterious Western legend for Eastern greenhorns.

Yet Gorham and Wheeler’s existence doesn’t preclude Benjamin’s. There are always more mysteries to solve.

So a big thank you to our anonymous reader for the help. We’re proud to have him as one of our readers and we look forward to more from him, and all of you, in the future.