On a sweltering summer day in Westminster, a royal prince comes bawling into the world. Crowds of city-dwellers gather outside the palace gates, jostling for a glimpse. Rumors and gossip spread. The Royal Family is being tight-lipped, and in the vacuum left by the absence of official information, the newspapers make a killing.

The year is 1688, and the birth of young Prince James has just set in motion the chain of events that would lead to the overthrow of the Stuart line and the accession of the current British Royal Family.

From the moment of his birth, James Francis Edward Stuart sparked wild speculation. Newspapers and street criers announced that he was actually an impostor baby who’d been secreted into the palace in the dead of night. Palace officials feared for the baby’s life. The problem was this: King James II and his wife, Mary of Modena, were both practicing Catholics in an era when anti-“Popish” sentiment among the English populace had reached a fever pitch. By bringing a “Popish prince” into the world, the Stuarts had ensured the survival of a Catholic dynasty ruling over a predominately Protestant nation.

The London mob, backed by powerful elements at court, began to advocate for a Protestant monarch. And as the Yale historian Steven Pincus has shown, this popular rebellion neatly coincided with Dutch ambitions to seize the reins of British government. Prince William of Orange, the husband of James II’s eldest daughter Mary, was either invited to take the throne (if you believe contemporary English accounts) or seized it with a brilliant mixture of military posturing and political acumen (if you believe Pincus and the Dutch).

Royal births have often been focal points for historic upheavals. But even in their more prosaic form as celebratory pageants (and its looking like the current House of Windsor has little to fear from the Dutch this time around), the history of how royal infants entered public life has much to tell us about the changes and continuities in popular understandings of birth, childhood, and public view.

Images of infants in the ancient world are exceedingly rare, but some depictions of the progeny of powerful figures do exist. Egyptian funerary monuments, for instance, occasionally commemorate royal or aristocratic infants who died young:

A statue of the high official Senenmut protecting the royal daughter Neferure, the daughter of the female pharaoh Hatshepsut. Neues Museum Berlin

The French historian Phillippe Aries famously argued that “childhood” was an invention of modernity. Medieval people, he claimed, tended to envision even the youngest children as miniature adults, capable of laboring from a young age. Medieval children were rarely sheltered from the facts of life (whether sex or violence) and they did indeed live appallingly harsh lives by modern standards. Skepticism continues to prevail about Aries’ core claim, but it is true that medieval depictions of royal births (and children in general) tend to focus on the adult figures. The 19th and 20th century fascination with “cuteness” isn’t much in evidence here. 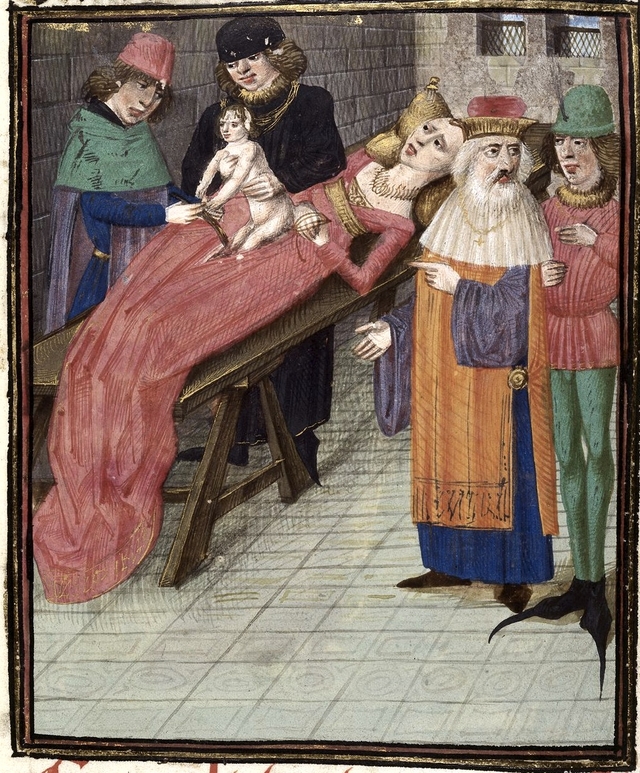 An unusually vivid late-medieval depiction of the birth of Caesar (via Caesarean section) from a French manuscript c. 1473. British Library, Royal 16 G VIII.

The Renaissance witnessed a new level of public scrutiny of royal families, as new means of displaying princely power (via newspapers, engravings and paintings, pageants, theater, and other media) brought the cloistered lives of the nobility into public life. The trend is clearly seen in the rise of official royal portraits of infants, for instance in Hans Holbein’s brilliant painting of Edward, the fifteen-month-old son of Henry VIII: 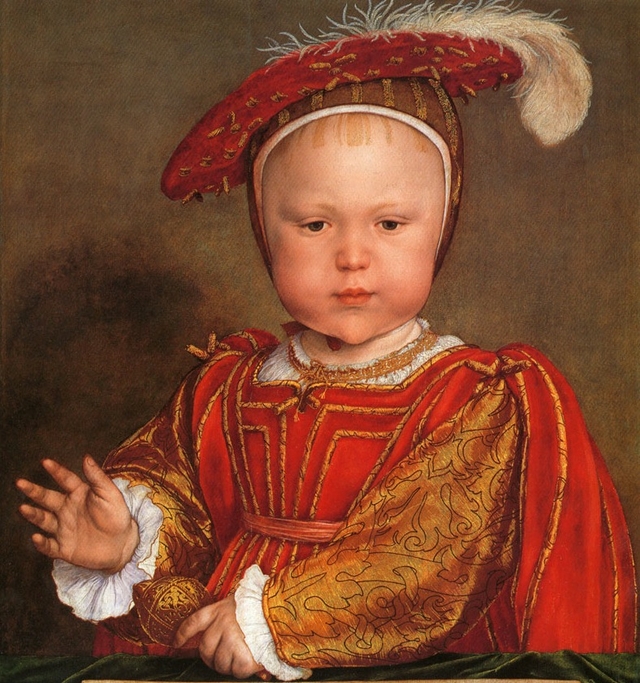 The Italian painter Bronzino, famed for his surreal allegories, achieved an even more creepily-cute realism in his 1545 portrait of the son of Cosimo di Medici, Grand Duke of Tuscany. The inert babies of medieval art have here been replaced by psychological realism, but the glassy eyes of the Medici princeling still have something of the doll to them. 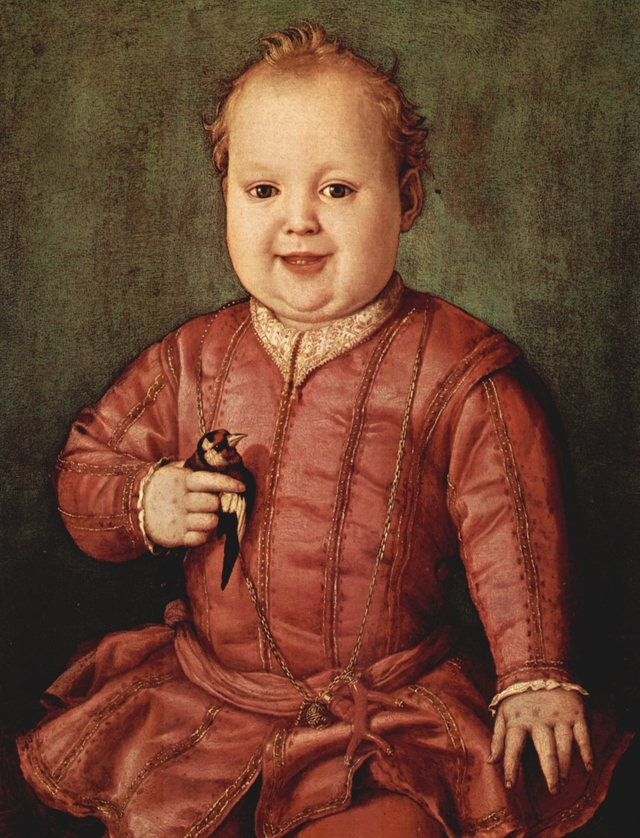 The rise of newspapers and the popular press in the eighteenth century ushered in a new artistic form: the satirical cartoon. It was swiftly wielded to poke fun at royal births (and royalty in general). 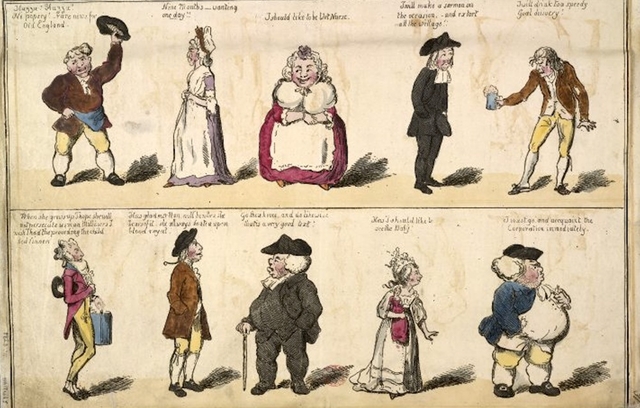 A satirical print commemorating the birth of Princess Charlotte in 1796 shows a new boldness and irreverence in how the popular press treats royal births. British Library

By the childhood of Queen Victoria, however, a shift toward sentimentality can be observed. Georgian wit had segued into the blend of forced naivete and stagy “cuteness” that has been associated with Victorian aesthetics ever after: 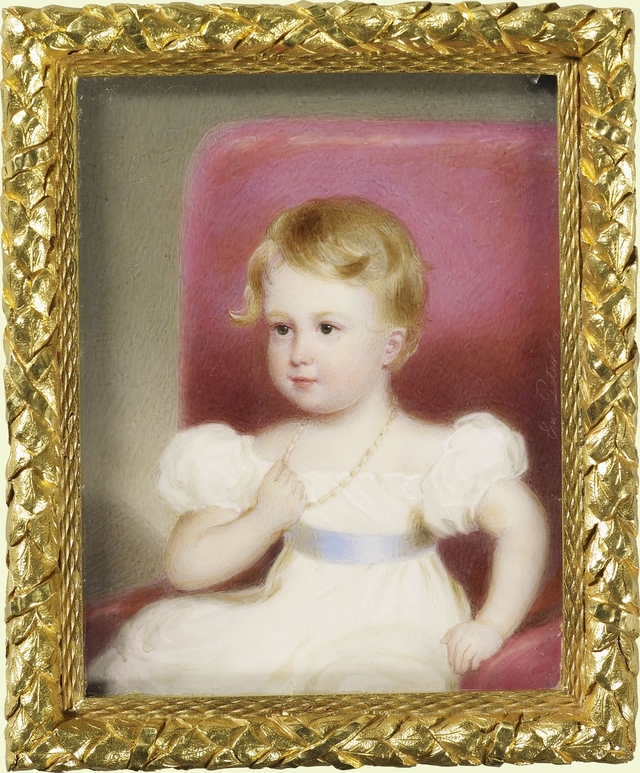 Emanuel Thomas Peter’s highly idealized 1821 portrait of Queen Victoria as a two-year-old brings us closer into the realm of modern idealizations of infancy. Royal Collection

It remains to be seen how the official persona of the new prince will be managed by the British Royal Family of today. Despite calls for a break with tradition from the Guardian and other news outlets, one suspects that the portrait will adhere to prior precedent. Some combination of the visual acuity of Bronzino’s young Medici prince and the stylized innocence of the Queen Victoria portrait is likely in the cards. But perhaps the new royal prince will usher in another shift in how we think about the very public childhoods of the (ever diminishing) ranks of the royal.