The Central House of Children’s Creativity investigates a robot, 1973.

Friendly Robots of the Soviet Union

Charles Shaw, in his upcoming Appendix article “The Most Soviet Park In Russia,” describes a 1959 guidebook to a Moscow park that captures the technological utopianism of the USSR under Kruschev.

From a distance he seems to be a visitor from the Middle Ages, a knight clad in armor. But his armor is aluminum and underneath it he lacks a beating heart, while his veins do not flow with hot blood. His heart is mechanical and his blood is electronic. He is a robot.

The robot greeted visitors by confessing: “Right now I can’t do much, just turn around, walk, talk…I’m controlled by radio.” However, it also bragged of its abilities: “We robots don’t fear work, nor heat, nor cold.” And, as Shaw writes, “visitors who did not speak Russian could pick up a nearby telephone receiver and listen to his message in French, English, or German.”

Shaw’s piece intrigued me, especially because I’d just picked up a copy of this official guide to the 1939 New York World’s fair: 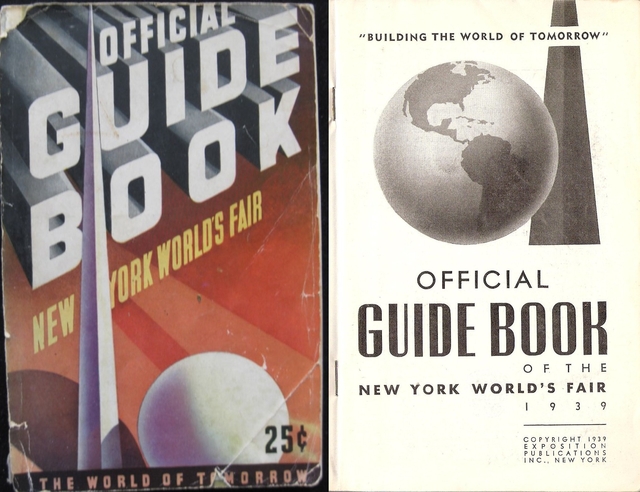 The 1939 fair featured “Elektro,” a robot from once-mighty (though now defunct) Westinghouse Electric Company who boasted of his abilities to smoke cigarettes and charm ladies before a delighted audience.

Robots strike me as a particularly interesting space where the technological competition between the Western and Eastern blocs played itself out. Both the Space Race and the nuclear arms escalation of the 1950s and 1960s, after all, relied upon mechanical automation. Robots stood at the center of the Cold War, either as real, albeit nascent, technology, or as harbingers of a technological future (our recent fascination and fear about drones is the next chapter in a long story). Making consumer-facing, friendly robots like Elektro was a canny propaganda move that humanized the emerging world of the non-human. Of course, if it wasn’t pulled off quite right, this attempt could backfire.

I’ve been interested in socialist bloc technology lately, like this cosmonaut survival kit, or the Agat 4, a Soviet copy of the Apple II that features some seriously bold exterior styling: 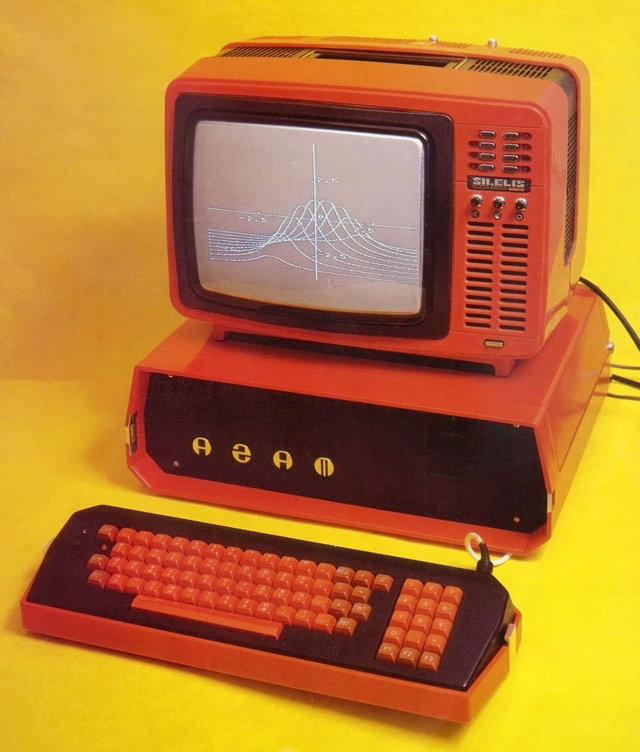 The most popular PC in the Soviet Union was a gem of Eastern bloc technology design. Wikimedia Commons

I couldn’t find out more about the robot in Shaw’s piece—but thanks to UT Austin professor of Russian history (and editor of Not Even Past) Joan Neuburger, I found out about this wonderful post about Soviet robots from the Russian website Metkere. 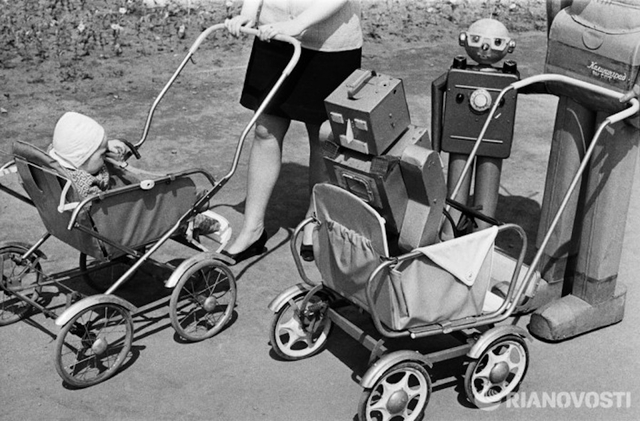 Robot and child exchange looks at the Station of the Young Technicians, 1969. RIA Novosti 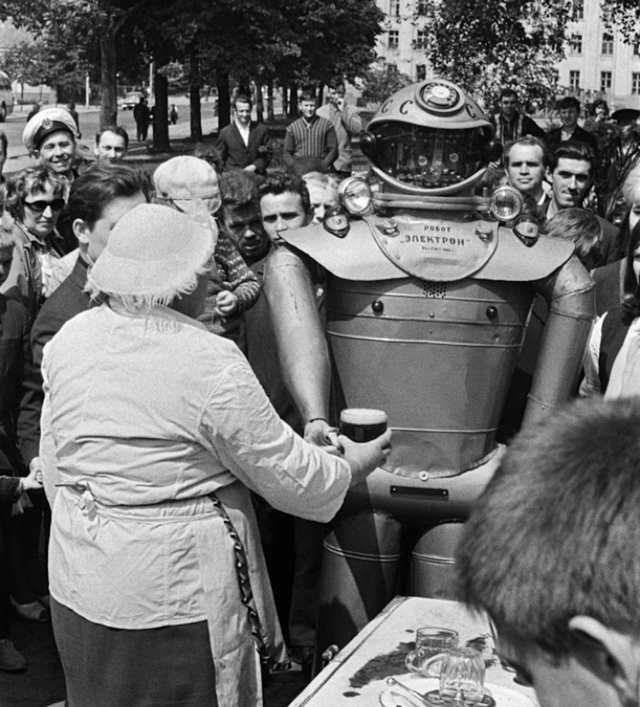 Even robots like to drink in Soviet Russia: a babushka hands this futuristic-looking robot from Kaliningrad what looks to be a pint of beer in 1969. RIA Novosti 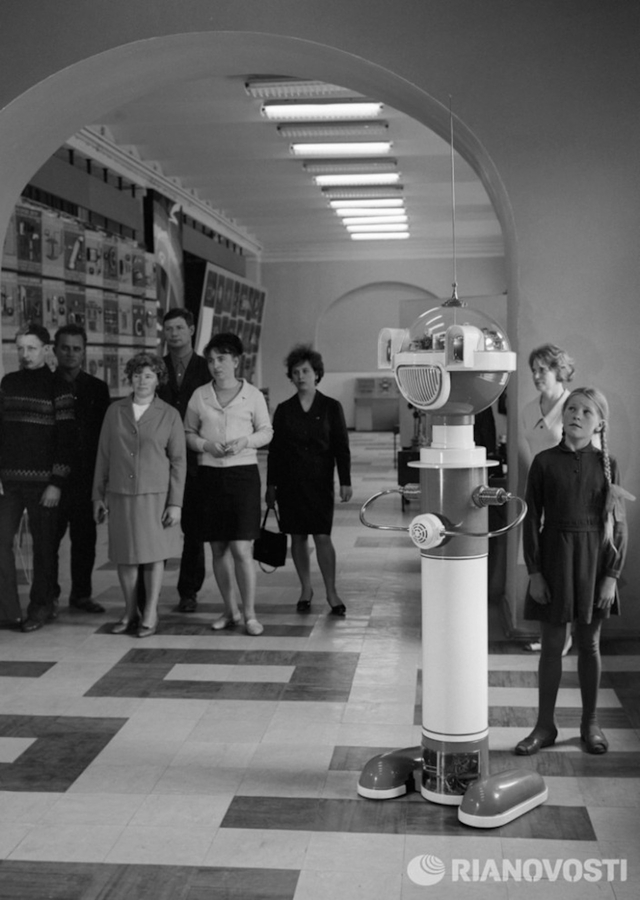 A robot leads the way at the Department of Automatics at the Polytechnical Museum in Moscow, 1969. RIA Novosti 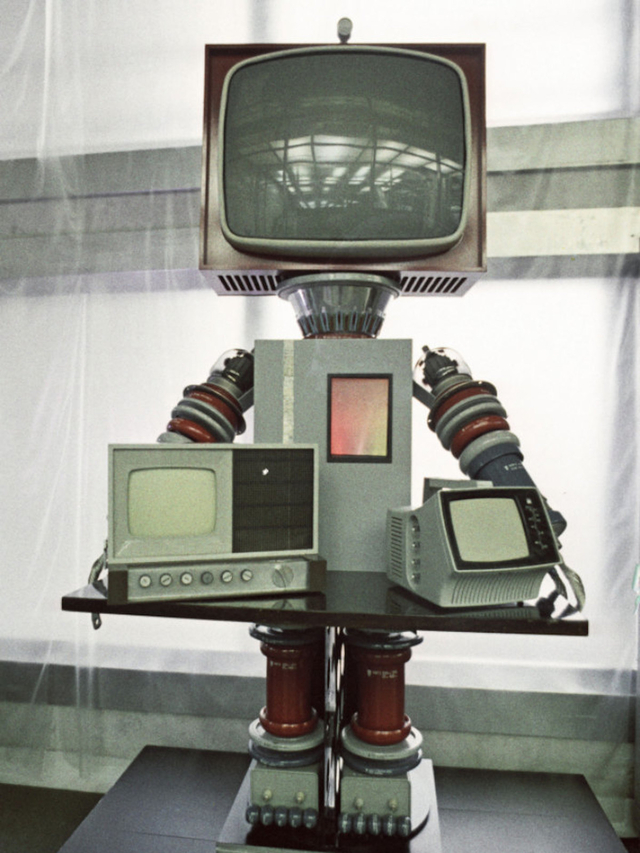 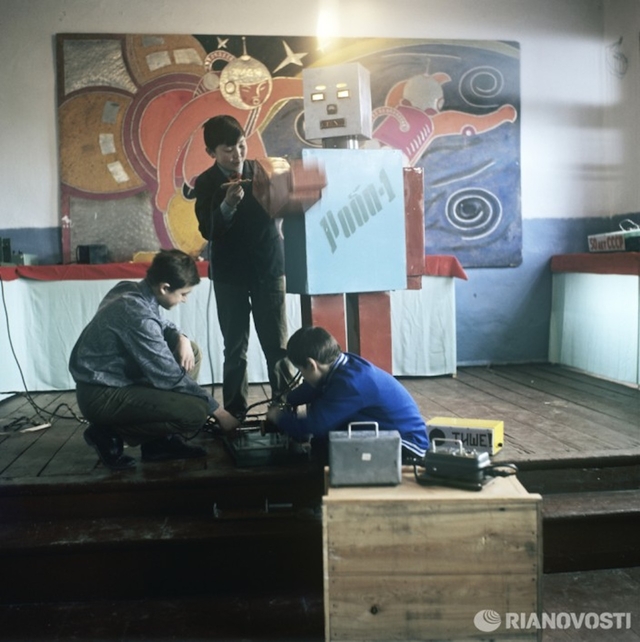 A glimpse into the inner workings of a robot in 1973. RIA Novosti 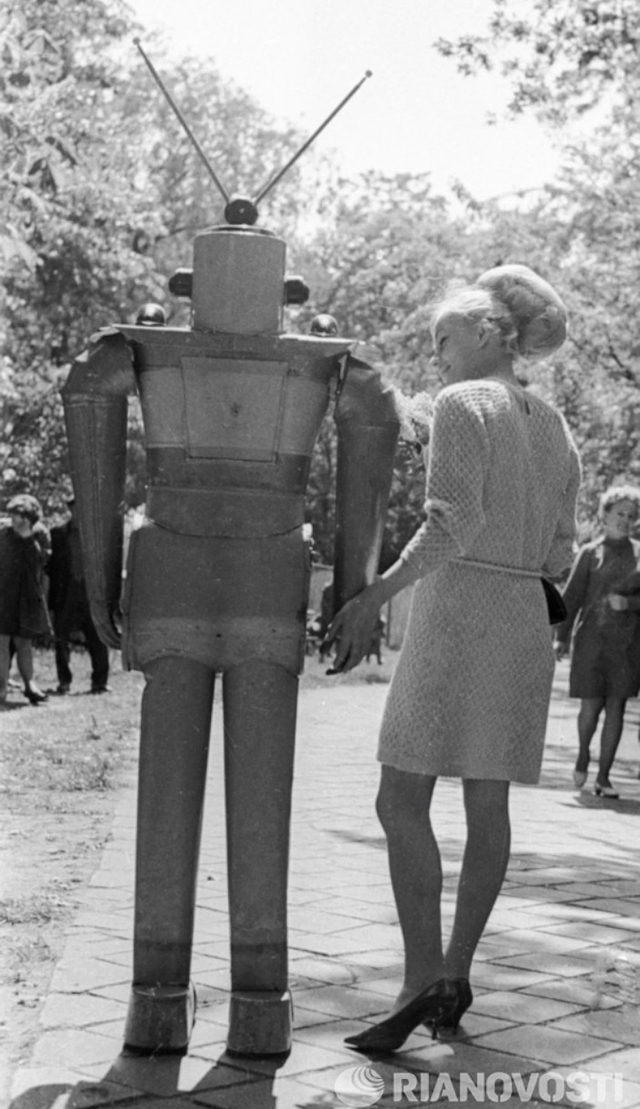 Robot and human in the summer of love, 1969. RIA Novosti

Thanks again to Joan Neuberger of UT Austin and Not Even Past, and be sure to check out “13 Weird Soviet Robots” over at metkere.com for more great photographs of Russian robots. And for another take on the retro technologies of the Cold War era, check out Megan Garber’s post on the history of the Consumer Electronics Show for The Atlantic.

Bonus image: here’s a photograph of East German computers on parade in 1987 (on the Fourth of July no less!) that’s been making the rounds online. The great thing is that its actually real. 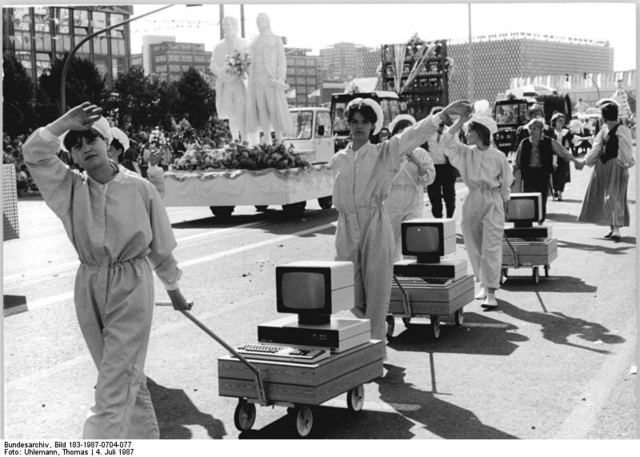 Computers on parade in Erfurt, East Germany. The computers are not Agats, but close: they’re PCs from the same era by Sömmerda. Wikimedia Commons, photo by Thomas Uhlemann, 1987