You might have missed him at first, the tiny, dark-skinned figure standing in the lower left-hand corner of this mid-nineteenth century portrait. He is “Señor Don Santiago de los Santos from the Island of Manila, 35 Years of Age & 2 Feet 2 Inches high.” He is so small that he barely reaches the knees of Miss Angela Melius, the 19-year-old “Giantess from the UNITED STATES”, the very tall woman who dominates the image.

This duo toured England together as part of a traveling show at some point between the late 1820s and the early 1830s. Many people would have paid good money to marvel at the giantess from America and the dwarf from Manila. Prints of the pair like this one would have been for sale as fans exited through the gift shop.

During his lifetime, Don Santiago de los Santos was undoubtedly the most famous Filipino in Britain. For me, a historian of the Philippines, this makes Don Santiago the most fascinating of the pair. 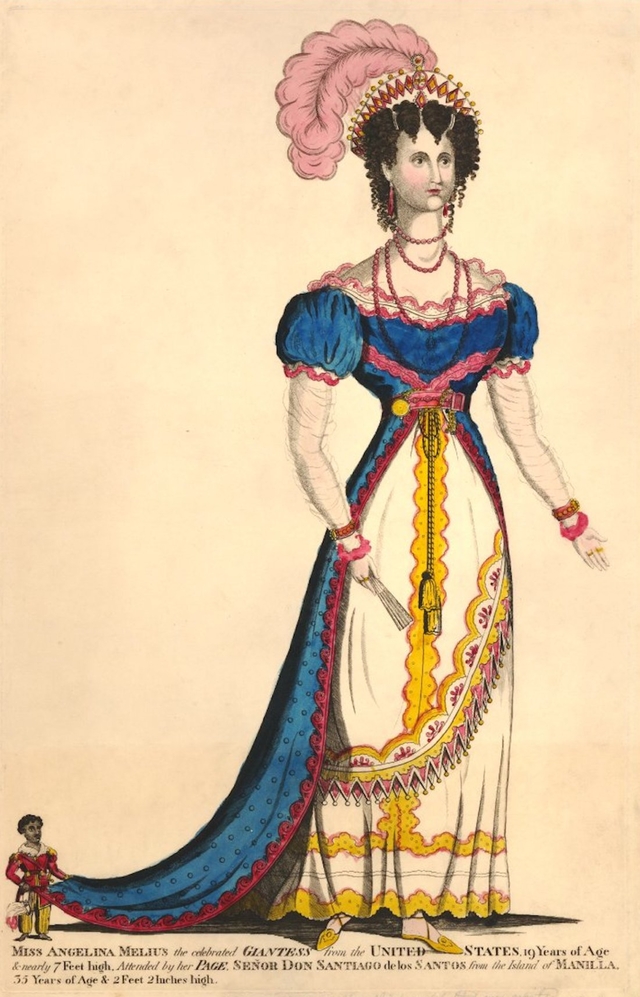 Just as gossip columns in newspapers today discuss the lives of the rich and famous, popular English journals of the late Georgian and Victorian eras documented Don Santiago’s life story, surely embellishing the truth somewhat to sell more editions. In 1836 the Mirror of Literature, Amusement and Instruction reported that he had born “in one of the forests” of the Philippines, where

he was exposed to death in his infancy, on account of his diminutive size. He was, however, miraculously saved by the Viceroy, who, happening to be hunting in that quarter, humanely ordered him to be taken care of and nursed with the same tenderness as his own children, with whom the little creature was brought up and educationed, until he had attained the age of manhood.

According to the Mirror, things went badly for Don Santiago when he was twenty years old and the Viceroy died. Don Santiago remained in Manila when the Viceroy’s surviving children returned to Spain. Soon afterwards Don Santiago made his way to Madras on one of the many trading ships that regularly travelled between the Spanish Philippines and British India. It is not clear how many weeks or months or years that Don Santiago remained in this South Indian port city before he met an English captain who carried him to England.

The Church of England, the English judiciary and the press were all obsessed with Don Santiago’s marriage to the Birmingham native Ann Hopkins, 38 inches tall. The medical journal The Lancet reported that

a protestant clergyman hesitated to marry them, on the presumption that it was contrary to the canon law, as being the means of propagating a race of dwarfs; but in this he was overruled by the high bailiff of Birmingham, and some legal opinions.

After securing the right to marry, the couple did so in two ceremonies in 1842, the first at the Catholic Chapel in Birmingham and the second at the Protestant St Martin’s Church.

At this marriage, the crowds were so great, that the assistance of the police was necessary to secure the ingress and egress of the little couple into and out of the church; the whole affair made no little noise throughout the kingdom.

It not clear how much control De Los Santos exercised over his many middle passages; first from “the jungle” somewhere in the Philippines archipelago to Manila, then from Manila to Madras, and finally from Madras to England. But it is clear that it was his unique body that afforded him this mobility.

The Mirror reported that De Los Santos lived a comfortable life in Birmingham.

His habits are moderate, and he seldom drinks any thing but warm water; but, on his birthdays, wedding anniversaries, and other festivities, he indulges in a few glasses of wine; and indeed, on such occasions, he passes round the bottle, and does the other honours of the table with much dignity, hospitality, and éclat. He is fond of music and dancing, and is a great admirer of the ladies; but his ruling passion appears to be a fondness for gay and glittering attire, jewellery, and silver plate—to all which luxuries he has been accustomed in the house and at the table of the Viceroy of Manila.

Don Santiago appears to have been well-connected to influential Spaniards in London.

Once or twice a month, he goes to the Spanish ambassador’s Chapel, where, secluded from observation, he worships with all the sincerity and devotion of a good Catholic.

Perhaps his mastery of multiple languages made it possible for Don Santiago to negotiate the complicated world he inhabited. “Besides his native tongue,” according to the Mirror, “he speaks and Indian Patois, converses freely in Portuguese, and in English indifferently well.”

**Kristie Flannery** is a Sydney-born, Austin-based historian with a passion for writing, teaching, travel, and activism.