This 16th century “rocket cat” has been making news lately—but the history of combat animals is much deeper.

Behind the Rocket Cat: Animals in Warfare from Hannibal to World War One

There’s a good chance you’ve come across the bewhiskered warrior above on the web lately: just in the past day, it’s been featured on the Guardian and ABC News. And for good reason: the image is the best combination of cats and history since those inky pawprints on the medieval manuscript.

The so-called “rocket cat” was made famous by two of our favorite purveyors of history on the web: Peacay, the proprietor of BibliOdyssey, and Mitch Fraas of the University of Pennsylvania. We picked up on the story back in January of last year, but it didn’t really blow up, as it were, until this past week. Internet-famous Twitter user Darth even recently made this animated GIF of the dynamic duo of rocket cat and his avian companion:

But what’s the deeper history?

The images comes from a manuscript owned by the University of Pennsylvania library which was written in the mid-sixteenth century by a Germany artillery master named Franz Helm. Helm explained in an accompanying note how he envisioned things working:

Create a small sack like a fire-arrow. If you would like to get at a town or castle, seek to obtain a cat from that place. And bind the sack to the back of the cat, ignite it, let it glow well and thereafter let the cat go, so it runs to the nearest castle or town, and out of fear it thinks to hide itself where it ends up in barn hay or straw it will be ignited.

So in point of fact, it’s not a rocket cat at all, but a type of unintentional feline suicide bomber: an animal from a besieged city enlisted by the enemy to carry a primitive form of bomb back into the city walls. And as Mitch Fraas explained to our friends at Atlas Obscura recently, “within a week I had turned up another half dozen examples of similar illustrations.” In other words, Helm wasn’t a madman: people actually appear to have thought the idea was at least somewhat viable.

The plan has a certain crazed cleverness to it: cats are, after all, extremely good at getting into places where they aren’t supposed to be. And early modern cities were crawling with stray felines, meaning that even a cat with a suspicious package might have escaped notice.

But there are also problems. For one thing, all images of the rocket cat and pigeon seem to show their bomb packets already aflame, which would seriously cut down on both the reliability and stealth of the operation:

In his recent interview with the Associated Press, Mitch conceded that the whole scheme “seems like a really terrible idea, and very unlikely the animals would run back to where they came from. More likely they’d set your own camp on fire.”

But when viewed in the context of early experiments with the capabilities of gunpowder and how it could change warfare, the rocket cat and his pigeon friend begin to make more sense. Helm is known to have participated in the ongoing battles with an expansionist Ottoman Empire along the southeastern border of Christian Europe. The Ottomans were masters of heavily artillery, having conquered Constantinople in part thanks to “superguns” like the 1464 Great Turkish Bombard: absurdly high-calibre cannons designed to blast holes through medieval city walls. Here’s one created around the same period by the Ottomans’ sworn enemies, the Austro-Hungarian Empire: 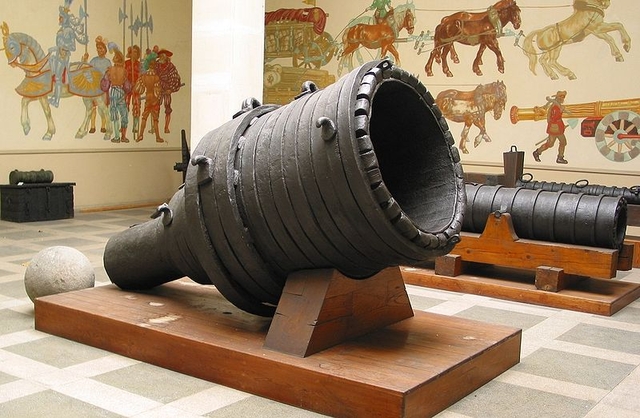 Franz Helm was an innovator and tinkerer, and he was living in a period of profound change. Gunpowder and rocketry had fundamentally destabilized warfare, and the Eurasian world was still trying to figure out what final form these new technologies would take. In the changing landscape of early modern war, any innovation (even outlandish ones) could be the secret weapon that changed the course of a battle. (Carla M. Cipolla’s Guns, Sails and Empires: Technological Innovation and the Early Phases of European Expansion is the classic book on the subject—I recommended it highly).

Moreover, unexpected animals had been the secret weapon in battles dating back to ancient times. The most famous of all is surely the Carthaginian General Hannibal and the stroke of surreal genius that has made him immortal: leading a troupe of North African elephants up through Spain and western France, and down through the Alps to the heartland of Italy. 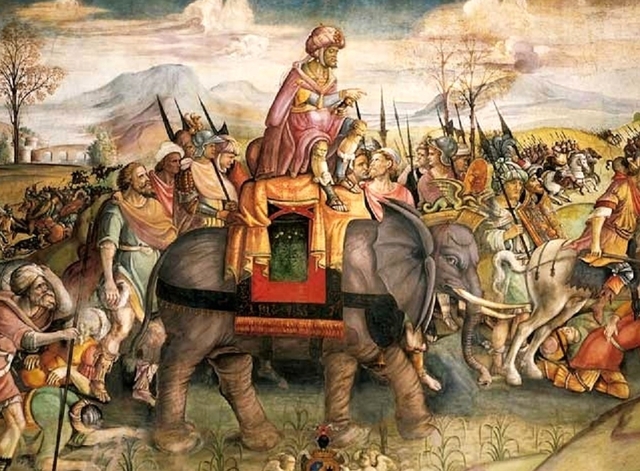 Hannibal came remarkably close to sacking Rome and forever changing the course of history, but in the Battle of Zama the Roman forces realized that they could spook his elephants by sounding loud trumpets, and the tide turned. Although elephants persisted in the Roman empire, they functioned more as curiosities and pets than as weapons of war. 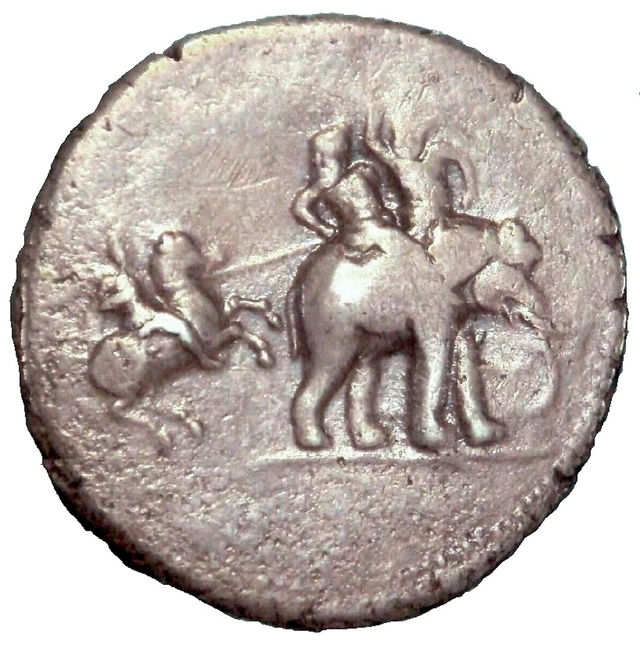 War elephants probably reached their apogee during sixteenth- and seventeenth-century Mughal Empire. Early modern war elephants were highly-trained and equipped with expensive chain mail or scale armor. South Asian potentates began to regard their war elephants as a marker of state power, somewhat analogous to nuclear weapon stockpiles in the 20th century, leading to mind-boggling reports of war elephant brigades numbering in the hundreds or even thousands (King Rajasinghe I attacked the Portuguese in Sri Lanka with a reported 2,200). The psychological impact must have been enormous: one only has to imagine over one thousand angry, violent pachyderms charging at you with archers on their backs to understand why armies were often routed by elephant cavalry before hand-to-hand combat even began. 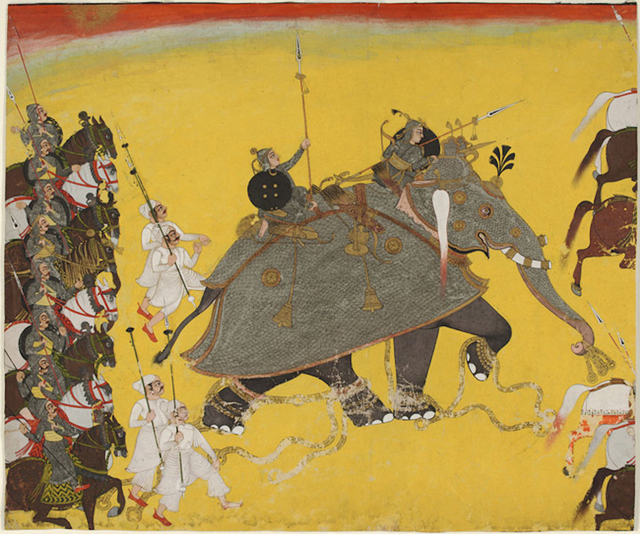 But by the eighteenth-century, cavalry was beginning to give way to artillery—and as Hannibal learned in the Alps, elephants don’t do well with loud noises. Elephant-mounted cannons and guns were swiftly found to be unfeasible (or at least I haven’t found much evidence of their use). Camels, however, turned out to be more amenable to the idea. The zamburak cavalry of Persia is little-known today, but it was a powerful force in eighteenth- and nineteenth-century battlefields: 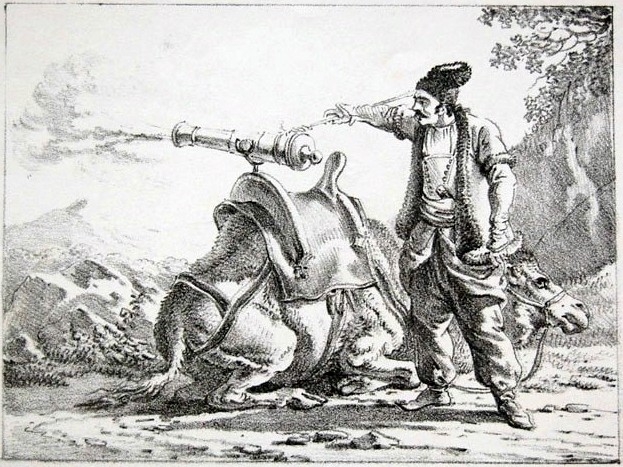 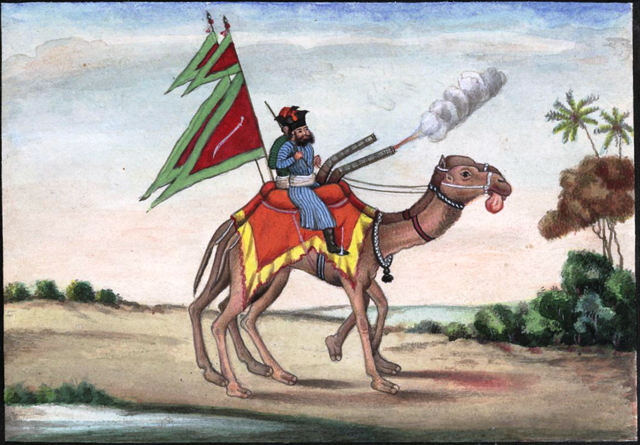 “Zumbouruckchee or Camel Artillery men,” from an album of paintings collected by Sir Thomas Theophilus Metcalfe in 1843. British Library

Amazingly, by 1862, the newly-invented Gatling Gun was already making an appearance on camel-back, as immortalized in this print from Harper’s Weekly. 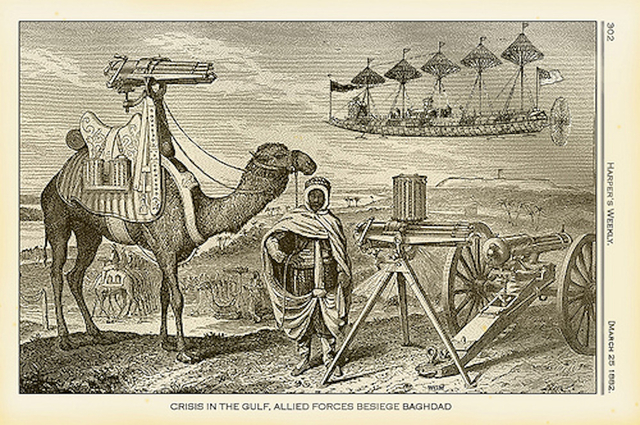 War animals, of course, played a famous role in the first World War—one that is too complex to get into in depth here. The sad slaughter of horses and pack animals in the Great War is well known, but other, more unusual animals made an appearance in the trenches too. One French war pigeon named Cher Ami was even awarded a “Croix de Guerre” medal for heroic service during the Battle of Verdun, having delivered a message despite suffering a gunshot wound which led to the rescue of two hundred US soldiers in the famous “Lost Battalion.” Meanwhile, the Germans were strapping cameras to pigeons and sending them over the lines of battle for surveillance: 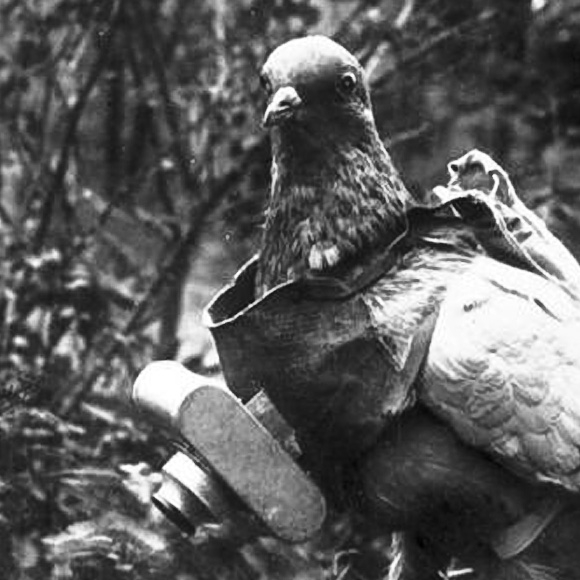 A German surveillance pigeon from World War One. Wikimedia Commons 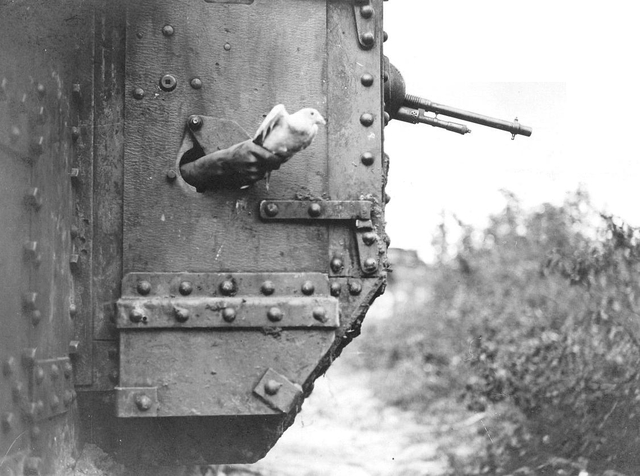 A pigeon being released from a tank during WW1. Wikimedia Commons

And elephants were making an unexpected appearance in Sheffield, England as heavy-lifters in munitions factories: 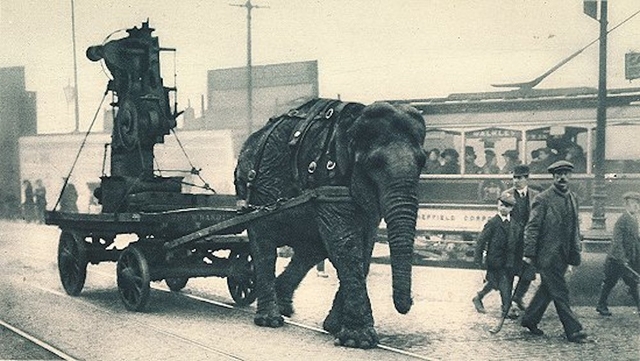 In short, war animals have been with us for a very long time. And although they feel decidedly quaint today, they were actually paragons of high technology, striking terror into the enemy and changing the course of history.

Rocket cat, it turns out, wasn’t actually burning out his fuse up there alone.