The Peg-Legged Explorer: An Interview with Kevin Cannon

This issue’s installment of Appendix, Appendixed features a cartographic chronicle on a little known feat of exploration, the First Thule Expedition, led by Peter Freuchen and Knud Rasmussen in 1912. The creation of the cartoonist Kevin Cannon, the feature was so enjoyable and immersive that we had to learn more. An interview with Cannon, conducted over email (and partly woven into the Appendixed feature), follows below.

You can buy a poster of Cannon’s cartographic biography at our shop.

If you ever run across a description of the Danish explorer Peter Freuchen, it will invariably come with a lamentation that Freuchen isn’t more famous than he is. Unlike pillars of polar exploration like Amundsen, Nansen, and Shackleton, Freuchen had lots of little adventures, all extremely colorful and written about at length, but in several books that I imagine are long out of print. I ran across one, Vagrant Viking, in a used book store in Seattle, and bought it on a whim. I’m glad I did, because I think about it constantly. The book is a full account of Freuchen’s life, from his misspent youth in Nykøbing Falster, Denmark to his many harrowing adventures in Greenland, Canada, and Siberia, and even to his time helping refugees during WWII and his later years as a Hollywood icon. Every page is filled with amazing and often hilarious anecdotes, and I’ve been waiting a long time to find an excuse to flesh out his adventures in cartoon form. 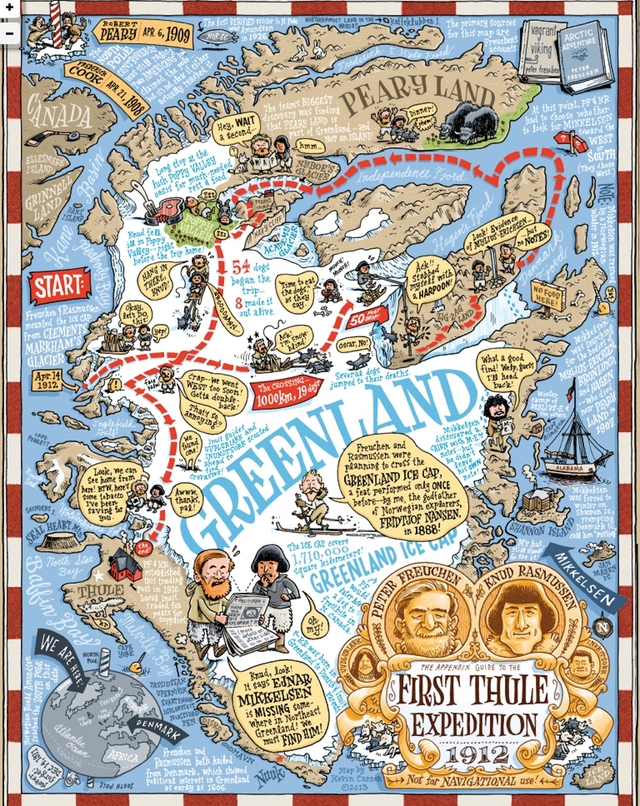 This isn’t your first foray into frostbite and derring-do at the top of the world. Why do you find arctic exploration so fascinating?

The seeds for my fascination with the Far North were planted at a very young age; the great explorer Will Steger visited my elementary school in Minneapolis and described his harrowing unsupported dogsled journey to the North Pole in which he ate sticks of butter like candy bars and had to use his naked body to warm up a teammate who had fallen under the ice. Fascinating stuff to a six year-old.

After that, my interest in exploration lay dormant until a trip to London in 2000 that coincided with the Maritime Museum’s huge “South” exhibit. That got me reading about Shackleton’s Endurance expedition (maybe the best entry point for anyone new to polar exploration), and I was so wrapped up in his story of survival that I made a special trip to Dulwich College to see the James Caird, the tiny boat that Shackleton used to save his starving men.

I think polar exploration has gripped me because of its grittiness and lack of sexiness. There are no Jack Sparrows in polar exploration. Outside of space travel, it’s the best example of men and women going where they don’t belong, facing likely death in order to—in many cases—just fill in a blank spot on a map. These polar trips are also great accounts of humans pushed to their absolute limits; the limits of loneliness (as with Admiral Byrd wintering alone in Antarctica), or starvation (as with the lost Franklin crew resorting to cannibalism), and of course extreme temperatures (as with Freuchen himself, who lost a leg to frostbite after burying himself in an ice cave in Canada).

The hardest part of making this map was limiting the scope. Initially the map was going to be a full biography of Freuchen’s life. But as I went through my dog-eared copy of Vagrant Viking, meticulously noting each little anecdote and place that would go on the map, I soon realized that the map I was envisioning would be the size of a wall and would take a decade to produce. Fortunately Freuchen’s description of The First Thule Expedition stuck in my head as something that could be a great map in its own right. 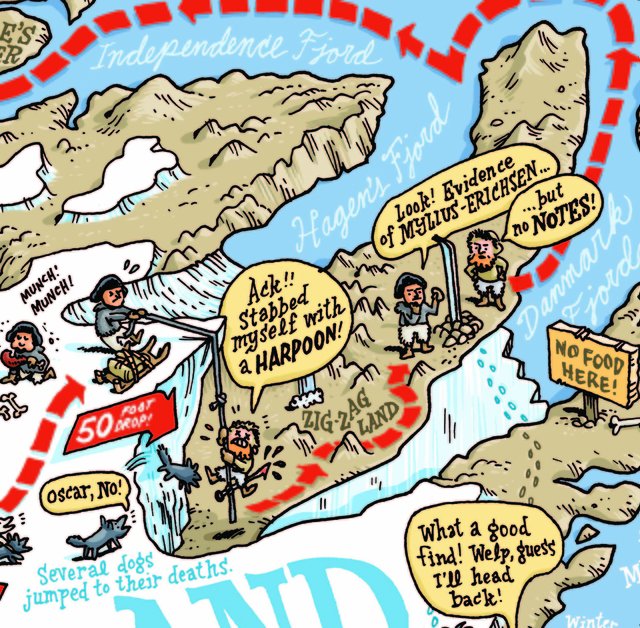 A detail from Kevin Cannon’s “cartographic biography” of Peter Freuchen and Knud Rasmussen. Kevin Cannon for The Appendix

The fun of the map was in the research—following the explorer’s notes and translating them onto modern maps of Greenland. In many cases I had to play detective and attempt to surmise which glacier or which route he and his team had taken, since place names have changed over the last century, and Freuchen’s own maps are very general.

It should also be noted that this map is my personal interpretation of events, and the point of it is to excite and inspire people who—like me—once viewed Greenland as a big ice-covered rock. Real historians and cartographers will note that besides the obvious fact that the scale is completely off, certain place names are incorrect as I used Freuchen’s account more than modern maps. Due to space limitations, I was also forced to leave out certain anecdotes, like Freuchen’s dive underwater to fetch his lost theodolite or the fact that Freuchen himself was on the Mylius-Erichsen expedition that started the whole chain of events in the first place. In any case, I hope that this map inspires readers to dive into a copy of Freuchen’s Vagrant Viking to see what other adventures this peg-legged explorer wrote about. 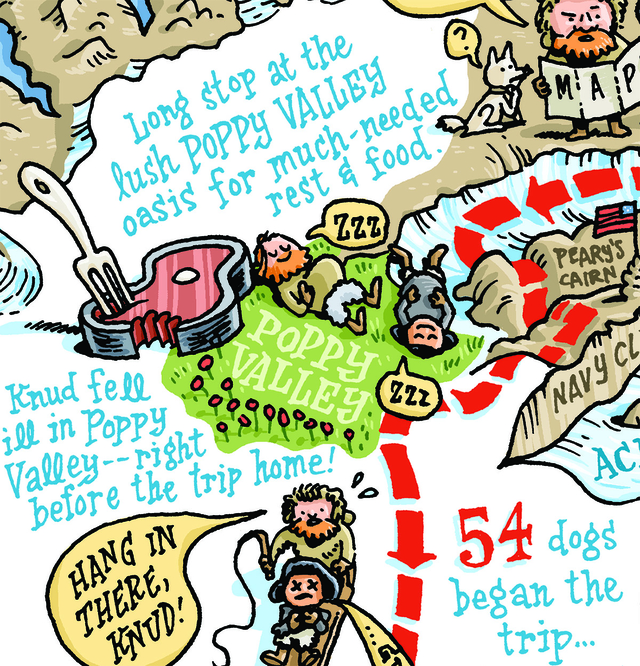 A detail from Kevin Cannon’s “cartographic biography” of Peter Freuchen and Knud Rasmussen. Kevin Cannon for The Appendix

We made a custom-coded viewer for you to explore Cannon’s complete map here.