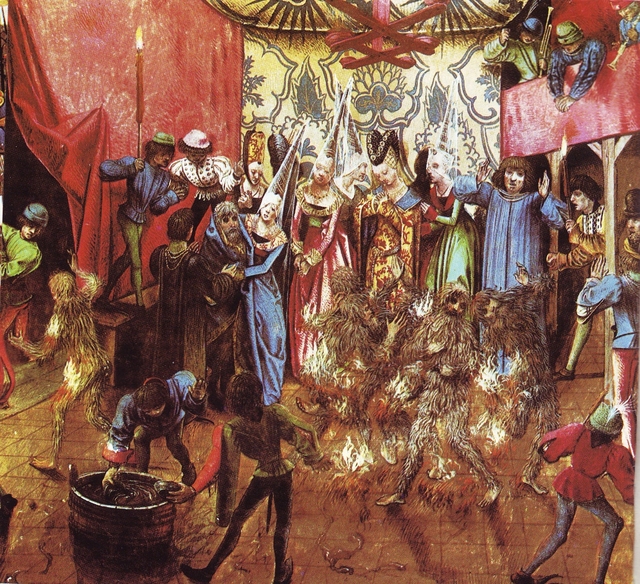 January 28, 1393: the mentally unstable young French King Charles VI demands that his courtiers dress as shaggy-haired “wild men” and dance in a “diabolical frenzy” while holding flaming torches. Their resin-soaked suits catch fire before a horrified court, killing four of the highest noblemen in France. After the carnage, Charles VI, who survived, was revealed to be one of the wild men. King Charles began to believe that he was made of glass and often ran “howling like a wolf down the corridors of the royal palaces.”

Keene Prize-winning poet Katherine Noble wrote this poem for The Appendix in the Cascade Mountains of Oregon, inspired by Charles’ story and the thought that “history can be summarized as the story of humans begging one another for attention.”

I do not want to board the ark with the other couples.
God is the saddest animal.
He cannot create an equal, so he is immortally
alone. On the seventh day,
he panicked,
taking a step back from the tableau. Realizing Adam
was sullen as his lover, he sacrificed
his own happiness. He created Eve.
While washing dishes at dawn, the chickens
shriek in my yard. The cock mounts the closest hen
and everything is violent, then over.
When I dreamt of my wedding,
a shooter hid in the rafters and everyone died
except me. There is a trapdoor
in the places you least expect it. A child’s treehouse.
The climax of the opera. The scene of the crime.

And happiness. I do not want it.
I am sweating through my silks.
There is not enough time for everyone to get what they want.
Let’s draw straws! I must referee
so I can rig the odds. Or marry into royalty.
As a child, I believed I could win everything,
but in retrospect, I usually cheated.
M. read my love letter out loud
to the class in third grade
while I was in the room.
Fifteen years later I still reveal
too much to men— can nothing
shame the animals permanently? I omit
details and remember love otherwise.
The function of revisionist history! Charles VI,
known as the Beloved

or the Mad, depending on who is translating,
believed he was made of glass and could die
at the slightest force. He swore
his coat of arms had changed into a lion
with a sword stabbing it.
He often ran through the palace wailing
like this kind of wounded animal, his death
chasing him blind. Noli me tangere.
God is the most fragile animal.
No one can touch him! Charles
lit his courtiers aflame
as they danced with him in wolf suits,
writhing like waifish women at a disco.
The French court clapped and clapped.
Everything is violent, then over.
My horoscope haunts me: Sagittarians
are prone to die by fire.

But tell me when it’s my turn
to shed my spirit and dance.
I am going to Guadalajara
where every color is primary
and every dance is for the groin!
I will weep with the midnight tenor and climax
with the brass of one thousand mouths.
The ring is reserved
for the dancing animals. I enter with the rest.
The drunk waltz of baboons, the ballerina
bears with kohl-lined eyes. The horses jumping through hoops,
carrying spangle-breasted women posing
spread-eagle. Distract me with a song and dance. Silence,
then another encore.

Then another, so I do not notice the curtains closing.
The water rising. The cannons taking aim.
History can be summarized as the story of humans begging one another
for attention, using a variety of violences and passions,
penises and slow progress to reach this end.
But, I do not cast the first stone.
In the animal kingdom,
this grief is not a private thing! The elephants
process around the carcass, smelling each bone
and testing the dead weight in their trunks.
The monkey carried its stillborn for two months on its back.
I remember the little Pegasus
flying out of the groaning stag
in Picasso’s pencil drafts of Guernica.
The spirit unaccustomed
to the gross fleshiness of our exaggerated
dying. It makes a quiet, erasable exit,
leaving only an animal body
writhing across that difficult, flaming tableau
in the draft we all remember.

**Katherine Noble** is a poet living in Austin, Texas.