Welcome once again to The Appendix letters page, where we offer letters from the past. In honor of this issue’s theme, we’ve found a few that touch on illusions personal and public, artificial and as real we make them.

As always, we hope they inspire you to write letters of your own—to The Appendix and to parties deserving and otherwise.
—The Editors

EDITORS—I don’t know if your articles upon “Optical Illusions” are particularly instructive to the majority of your readers, but they were very interesting to me for they revived reminiscences of the past.

Many years ago when I was an apprentice, a strolling fakir had occasion to visit the shop where I was employed to get a little job done. If I remember rightly it was a screw to be fitted to an automaton. While waiting for the job the magician amused and astonished the apprentices by performing before their verdant eyes wonderful feats of legerdemain. He apparently swallowed nuts and bolts with lightning dexterity! I attended several exhibitions that the wizard gave and among the many tricks were numerous experiments in electricity, such as the glass clock dial, bell, and strong box. His mechanical experiments consisted of the suspension, inexhaustible bottle, automaton peacock and harlequin, etc.

The performances caused an intense excitement among the workmen and apprentices in our Shop, who were all anxious to know “how the thing was done.” Among the boys in the shop was a smart lad who allowed his curiosity to get the better of his judgment. He resolved to find out how the magical apparatus was constructed. While his companions were asleep this lad fitted keys to the building where the apparatus was kept. He entered unobserved and examined to his heart’s content the wonderful mechanism that had created so much excitement. In attempting to leave the building he was detected and arrested. His motive was not for gain, but only an intense desire to see how the thing worked. He was placed under bonds to appear when the court called him, but that day never came, for, by the advice of his friends and relatives who knew the circumstances of the case, he departed for the West, where, by his own exertions, he has now a position of trust and responsibility, and is to-day the master-mechanic of the largest road out of Chicago.

I have no doubt but that he reads your articles, or ought to, and I often wonder if he recalls to mind the youthful days when he wanted to be a magician. 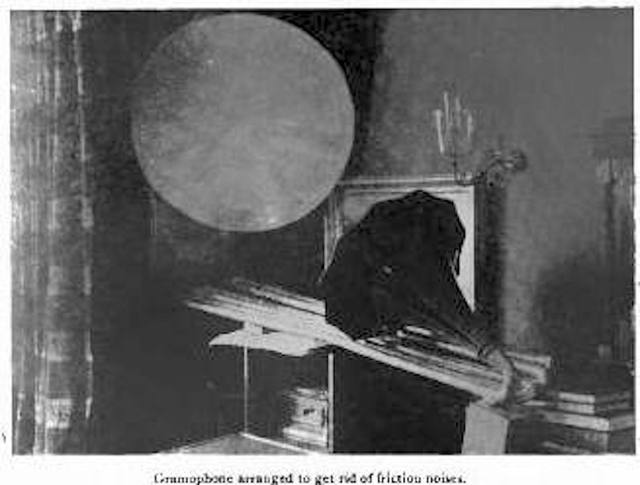 “In NATURE of April 15 and October 21, 1909, I described various experiments with the gramophone … As listening to music so reproduced is a kind of auditory illusion, any contrivance that will heighten the illusion may be expected to give more pleasure if the illusion is of the right kind. Usually one feels a sense of unreality in the music apparently rising from the bottom of the ‘horn,’ more especially in listening to a human voice. To get rid of this, I angle the horn, as shown in the figure, so as to reflect the sound waves from a tin reflector (parabolic in character) so placed as to send the sounds to the other side of the room. One then ceases, while listening, to think of either the gramophone or the horn, as the sounds come from the reflector, and the effect is much more real and natural.”

Dear AFRO: The AFRO’s August 10 editorial onslaught against passé preacher-politicians and politicianer-bishops was as timely and accurate as your New York staff man’s report of the cheese-swinging melees of big-time Democrats was inaccurate, at least in one instance.

For, Dr. Silas F. (not B.) Taylor and Shag Taylor of Boston are one and the same fellow.

I WISH TO THANK Mrs. Kathryn Wilcox and Mr. I. Fenne for the mercy they showed me when they found me in Kasson and I had fallen among thieves, which had stripped me of my raiment and wounded me and departed, leaving me half dead, and passed by on the other side.

Mrs. Wilcox and Mr. Fenne when they saw me, bound up my wounds with kindness and took me to the Inn, but the Priest and the thieves were going to take me to the insane asylum. Blessed are they when men shall revile you and persecute you and shall say all manner of evil against you falsely for my sake.

It isn’t what people think of us, It is what God thinks.