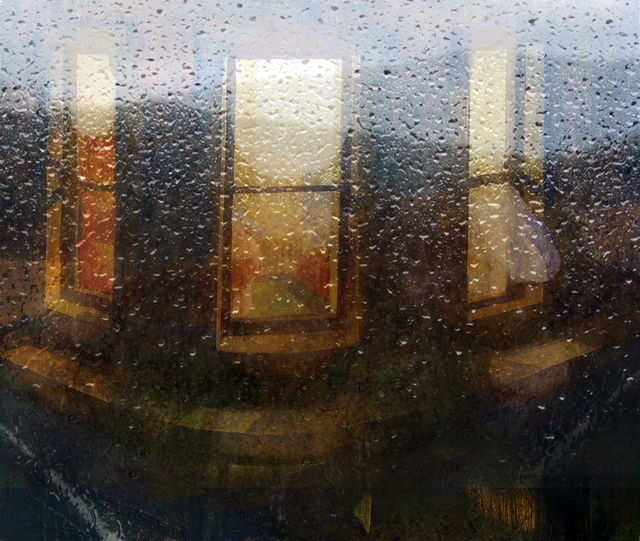 Rose knows she’s got no clean clothes except for one frock she’s been saving so she sits on the bed filing her nails with a nightie pulled around her limbs, the frothy lacy top barely hiding her breasts. It’s been raining for a week now, and most of her garments are sodden on the line strung between the ledge of her bedsitter window and the brick tenement across the other side of cobblestone alley. She glances out the window, smeared with fat from cooking bacon and chips on the one gas ring in the bedsit, and looks at the clothes, thinks they look like exotic coloured birds wet through, out of their clime, huddled together for warmth against the weather.

Rose shivers, but it is warm in the bedsitter because it is so small and the warmth from Rose’s body heats the confined space. A bit stuffy she thinks, but better than being outside in that lot. She breaks a nail; the purple bits fall like pottery shards all over the unmade bed. Rose swears softly under her breath. Not like the last time something happened to upset her.

Swearing like a trooper under fire, Rose was with the landlady, living right next door, knocking on the door demanding to know what the commotion was all about. Rose opening the door a lizard-smile-sliver to stop the woman looking in. All curlers, bunions and damp smelly dressing gown, the landlady, and a nose as long as an elephant’s trunk ready for snooping into the affairs of her lodgers.

But Rose wasn’t about to be intimidated by that baggage, not like the other boarders were. She wouldn’t let her in when the woman demanded entrance to inspect her property.

“Yer not comin’ in here. Yer inspect with notice to me not off the cuff, and yer know it. I pay me rent on time so yer’ve no reason to whinge,” she told the woman.

“I don’t have to put up with language like that comin’ through the walls,” the landlady replied.

“Well then, I shouldn’t have to put up with the noise yer make when yer gentleman friend comes callin’ on yer. Like a stuck pig yer were last time, snortin’ and squealin’. Yellin’ for him to put it all in,” said Rose.

The woman turned the colour of the cheap tawny port she drank late at night, turned on her heel, went back inside her flat, slamming the door after her. Rose shut her door, turned and went back to her gentleman friend in her bed, the man sitting there sheepish and apologetic because he’d spilt red wine on the sheets and set Rose off, turning the air blue.

Rose smiles to herself now, remembering the incident, and she wonders where Johnny Shortcross is now. She hasn’t seen him in almost a year; the last she saw of him was that night he spilt the wine, Johnny later standing under her window and waving to her, his duffle bag jammed under one arm, his big cheesy grin shining like a light in the night. But his black shirt and brown dungarees faded quickly into the murk of the alley as he headed off looking for work.

It’s all he seems to do, look for work, thinks Rose as she carefully shapes the small nail of the little finger of her left hand, holds it up to the lamplight. It looks like a tiny moon, reflecting her face so she looks back at herself; self-consciously she pulls the nightie up to hide her breasts from her sight.

She ponders the proposal of marriage Johnny left her with the last time she saw him. Down on bended knees he went, and he looked so ridiculous, so comical Rose burst out laughing, and set the landlady knocking on the dividing wall. It was all he could do to get the words out, embarrassed by Rose’s laughter, and hampered by the terrible stammer that only ever disappeared for a little while after he’d made love to Rose.

Occasionally she gets an envelope, Johnny’s name rudely scrawled on the front, a money order inside. He can’t read or write so Rose knows what an effort it must have cost him to commit his name in ink on paper. But the money order is more than money; it is a poem that tells her he loves her, and Rose weeps.

Sometimes she imagines she sees the dried sweat on the money order because she knows Johnny Shortcross isn’t sitting somewhere in a nice cool office writing letters on expensive letterhead paper. He’s out in the paddocks of far western New South Wales ploughing, or he’s under the searingly-hot tin roof of a shearing shed in The Territory taking the fleece from two hundred sheep a day or he’s bent over wielding the steel blade into the thick stalks of sugar cane in Queensland.

But when will he come home she wonders, does he even remember how to get back to me, does he want to come back even though he sends me money on occasions? It’s lonely for a girl by herself in Glebe, Sydney, with the rain falling like a leaden veil, and a landlady waiting for the merest excuse to chuck her out on the street.

Rose wonders about her new gentleman friend; he’s almost a complete mystery to her, not someone she’d normally rub shoulders with or anything else with for that matter. Mr. Bates is what she calls him because she doesn’t know his first name. It’s like going out with your own father or a schoolteacher too old to be playing around with young girls.

He’ll be here soon, she knows, and although she finds his company awkward, it’s nice because Mr. Bates intimidates the landlady, who sticks her head around her door when he arrives, smiles and blushes when he says good evening to her. Honestly you’d think she was about to curtsy to him sometimes, the way she grovels thinks Rose, and starts filing the nails of the other hand.

As she files, she’s careful not to dislodge the sliver of diamond inset in the index finger nail; a present from Mr. Bates who seems to want to please Rose in any way he can. Rose looks at the eye of diamond and it blinks at her the way the eyes of the feral cats in the alley blink at her when she sits on the window ledge at night to get a breath of fresh air.

Rose thinks about her first meeting with Mr. Bates, that balmy summer evening with the air full of musk and roses as Rose walked along Pit Street, not wanting to go back to her bedsitter in Glebe where the air smelt like rotten bananas. She wanted to be out and about even if there was little in the way of amusement, not since the crash hit in America and the clubs, the dives and dens of Sydney boarded up their premises with wood and tin.

But it was enough for the young woman to walk amongst the throng of passersby, to hear their voices, smell the cigarette smoke of the men, the perfume of the women. It took away the loneliness as she pretended she knew every one of them, pretended they would all stop and chat with her. Then some of them would invite her to a comfortable brick and tile home on the North Shore with steaming lamb, vegetables and a boat of hot gravy on the table, and some decent plonk winking at her in fine crystal glasses.

Thoughts of wine, lamb and a warm North Shore home made her careless, and she walked straight into the man, standing on the corner, and knocked him flat on his back. All apologies she was until he told her not to worry. He asked her to come with him for a drink in the saloon bar of one of the pubs down along The Rocks. A bit rough for someone like Mr. Bates, Rose thought later, but he didn’t want to see her walk away from him into the crowd, she knew. And so it went from there.

Suddenly there’s a knock at the door and Rose knows it’s him even though he’s half an hour early. It’s a habit with Mr. Bates, turning up early as though he’s keen to find her unprepared, but for what she doesn’t know. And she is unprepared, rushes to the door to rescue him from the landlady.

Opening the door with one hand, she pulls the nightie over her nakedness with the other hand, and he’s there, holding a bunch of carnations, funeral with their red and white markings. His eyes play over her form under the garment, but she has no choice other than to let him in because she hears the creak of the landlady’s door.

She regrets it straight away, but it doesn’t seem to bother her visitor, and the smile spreads broadly in his face as he steps into the bedsitter, closing the door behind him. Rose looks at him, sees the three upper teeth armoured with gold. She sees the narrow rabbit shoulders, and the skin that looks like the white, slippery belly of a shark Rose once saw pulled from the harbour when she was a child. She makes him turn his back, and slips into her one clean frock.

He takes her out on the tram; they sit on the same seat in silence. Rose sticks her head out the window as the vehicle trundles into the leafy suburbs of the North Shore, she smells the sea spray and she laughs for the sheer joy of it. Pushes from her mind the thought of returning to the Glebe later.

Mr. Bates pulls the cord, they get off and walk; her high heels hammer pistol shots on the pavement. Mr. Bates, his hand under her right elbow, directs her down an alley and stops. He looks up, and Rose follows his gaze. She sees the room at the top of the apartment block; it is golden with electric light.

“It’s for you, Rose. If you want it,” says Mr. Bates. “I’ll pay the rent and you stay there. I’ll see you three times a week when I can get away from my family. No more landladies, no more smell, no more rats.”

Rose looks at the light and, for a second, she imagines she sees Johnny Shortcross struggling towards her, wading his way through the thick amber.

Russel Drysdale, a famous Australian painter, is known for his bleak desert landscapes of Australia. I find the same bleakness in the painting Woman Filing Her Nails. It is easy to see the setting as warm and even welcoming, but the single room is stifling for the woman and the viewer of the painting. There is a desolation despite the fact that it is a very sexy painting; the woman’s legs and breasts are almost completely exposed. There is the suggestion of prostitution; the woman may well be waiting for another client to arrive. In my story, I made the main character instead face the choice between her rich older lover and the man she loves, Johnny Shortcross.

**Gregory Bogaerts** is a writer who lives in Cooranbong, Australia.