Heavy Metal as Public History: A Review of Turisas, Live at the Gramercy Theater

The Finnish metal group Turisas are historians, and their performances are public history. Instead of spelling out prose narratives, they sing, shout, and strum stories about the past that make the world of medieval Vikings accessible and epic.

“Konstantinopolis!” might not be a cry that one would expect to cause a hall full of metalheads to erupt. But when Turisas belt it out in the chorus of their eight-minute saga “Miklagard Overture,” it calls forth the wonder that captivated eleventh-century Norse travelers as they first beheld the temples and halls of the Byzantine capital. It is, simultaneously, a celebration of the Vikings’ triumph after braving the portages and rapids of the long rivers of Rus and an invocation of their future glory as members of the Romaioi emperors’ Varangian guard. 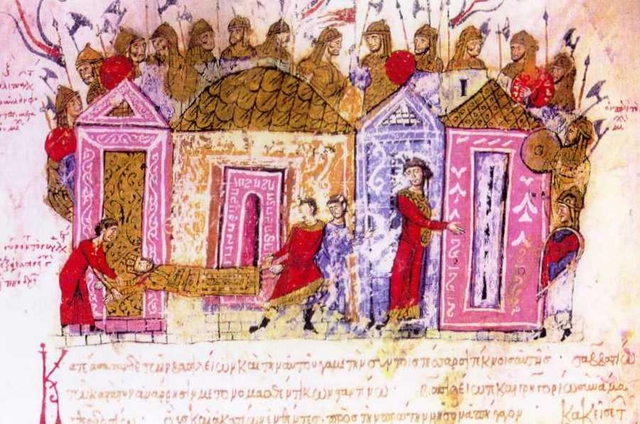 An eleventh-century depiction of Varangian guardsmen, Norse warriors who served as the personal bodyguards of the Byzantine emperors. Wikimedia Commons

In this thick history, the Vikings’ values, dreams, and own sense of history are represented in music. Turisas presents a glorified version of the past, but they do so in a voice that Vikings may have recognized as their own as they ventured forth “for fame and for gold.” Turisas’s sound—heavy, majestic, haunted, and courageous—might be a more effective language for creating a sense of how Vikings experienced their own lives than scholarly prose.

Founded in 1997, Turisas—named after the ancient Finns’ god of war—were part of Europe’s emerging folk metal scene, a genre that mixes the power of heavy metal with symphonic orchestration and mythical or historical themes. Despite shifts in membership, the band has achieved international popularity in recent years and has spent 2013 touring North and South America, Europe, Japan, and Israel. Turisas’s first LP, Battle Metal (2004), lacked the polish of their more recent albums, yet it introduced the group’s ongoing critique of academic history’s ability to understand past lives:

Did you ever see history portrayed as an old man… waging all things in the balance of reason? Is not, rather, the genius of history like an eternally blooming maiden… humanly warm and humanly beautiful? Therefore, if you have the capacity to suffer or rejoice with the generations that have been… to live among them with your whole heart and not alone with your cold, reflecting judgment, then follow me.

Turisas’s show in New York was a small step toward creating this experience. An audience of a few hundred mostly young white men (some in face paint, one with chain mail and a drinking horn) chanted “Too-ris-ahs” as the club’s DJ incongruously played Dire Straits’s “Walk of Life.” The six performers appeared on stage in their iconic red and black body paint while the theme song from Indiana Jones and the Temple of Doom trumpeted their arrival. To set the scene, they piped in a soliloquy from their own “Holmgard and Beyond”:

Who is “I” without a past? A river without a source? An event without a cause? Threads of different lengths, some longer, some shorter, so many of them spun together.

… then launched into “The March of the Varangian Guard,” a fist-pumping homage to the Vikings-cum-Byzantine warriors who fought in Asia Minor on behalf of the “King of the Greeks… in the 6542nd year of the world [1034 CE].” 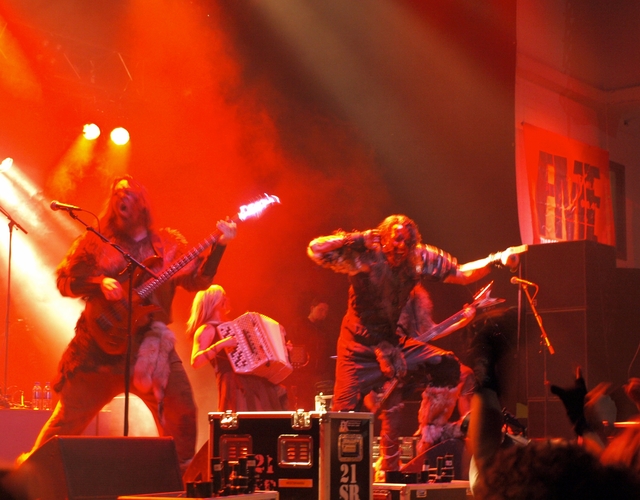 Turisas’s sound was hard, but it wasn’t raw; they took the performance seriously and echoed the clarity and precision of their studio recordings. Unlike their recent albums, the concert did not follow a clear narrative. Instead, it interspersed some of the group’s older mainstays like the drinking song “One More” and their metaled-out remake of Boney M’s “Rasputin.” After electrifying the audience with their first four songs, violinist Olli Vänskä performed a somber solo dirge that added texture to the otherwise intense set list. Despite the disjointedness of the concert’s narrative, frontman Mathias Nygård reminded listeners of the vision of the past woven throughout their songs. As he pumped the audience up for “Miklagard Overture,” Nygård invited us to ponder the awe one might feel when seeing the Golden Horn for the first time.

Most importantly, the concert was really fun.

This was public history, even if the audience didn’t know it—especially because the audience didn’t know it. It was history translated into present exhilaration. Music makes history feel less mediated than prose narratives. This is not because musicians impose their perspectives on the past any less than authors—both thoroughly shape the stories they tell. But musical histories leave less space for audience members to determine their own reception of the narrative. A song, like history, moves at its own pace and listeners must keep up; a book moves at a reader’s pace. Musicians can use a song’s tempo, key, and timbre to promote a particular mood before introducing narrative; authors have little say in how their readers are feeling when they pick up a book. Listeners access the sense of history that a musician intended to create more directly; readers have a greater say in their own interpretation of written history.

The detachment created by reading may be necessary for critical scholarship, but music helps audiences interject less “cold, reflecting judgment” between themselves and a particular historical vision. Musical history is as constructed as any other, but, as a genre, it has a deeper pedigree than written theses, harkening back to a tradition at least as old as Homer. If Beowulf-era bards had had electric violins, the sagas they performed in their ring-lords’ halls may have sounded something like a Turisas concert.

Turisas, far more than their counterparts in academic history, push listeners to empathize with specific historical actors. This is an unapologetically subjective approach to history: we all experience the world subjectively, and any effort to make an audience experience—and not just reflect on—the past would, it seems, demand this rejection of ostensible objectivity. Turisas knows that one man’s conquest is another’s ruin—“We’ve enslaved the world, we’ve slaughtered, we’ve burned, all in the name of our faith. Only a fool would expect others to settle for anything less, the tide is about to turn”—but they nevertheless insist on presenting their narrative within what they consider to be a Viking moral universe. The violence in Turisas’s music is neither racialized (“diversity is what unites us”) nor overtly misogynistic, yet they rarely deviate from the hyper-masculine heroic ideal that they view as central to how Viking adventurers experienced life. One need not endorse this ethos (I don’t) to appreciate that it played a big part in Viking history and, when taken with the requisite grains of salt, enjoy music that expresses it through stories and sounds. 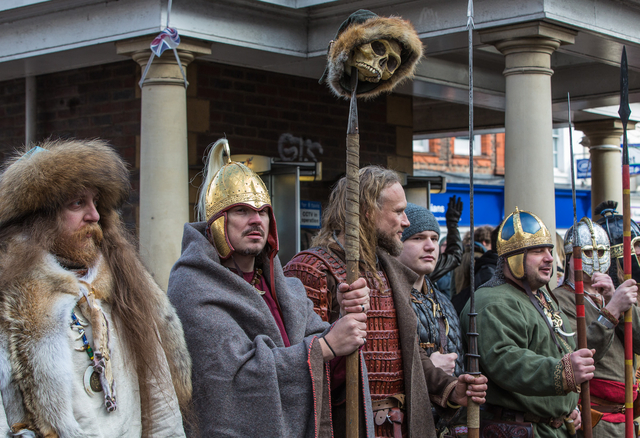 Reenactors at the Jorvik Viking Festival, 2013. Allan Harris, via Flickr

Collectively, the albums The Varangian Way (2007) and Stand up and Fight (2011) tell the story of a Viking band that sets out from Scandinavia for Constantinople. For Turisas, the Great City was only a superficial goal; the real glory was having the courage to risk all in pursuit of a place in history: “Many dangers lie ahead. Some of us may never return. Rather sold as a slave to the Saracens than chained to your bed, chained by your life.” Led by Hakon the Bastard, Turisas’s Vikings sail and drag their longboats across Eurasia and, by the end of The Varangian Way, drift into the Byzantine capital and join the emperor’s service. Stand up and Fight picks up the story. While fighting Byzantium’s enemies on land and sea, Hakon learns of a royal death back north and flees Constantinople to claim a throne of his own. Here the narrative’s chronology is disrupted, but it seems that the Vikings’ fate was tied to Byzantium’s: the 1453 fall of Constantinople and Hakon’s eleventh-century death are twinned in the album’s last two songs.

But even death did not mark the end of Hakon’s history. In his final line, Hakon realizes that “it’s not about what you take with you, it’s about what you leave behind. And there, on the side of a lion, this story found its end.” Hakon’s ability to tell his own story did, quite literally, end on a lion’s side: around 1043, one Hakon and his compatriots inscribed part of their tale into the flank of an ancient lion statue in Piraeus, the Athenian harbor where Turisas’s Hakon perished. What Hakon left behind was a thread connecting past and history, a thread that Turisas has picked up and lengthened.

Turisas glories in strength—the prowess of warriors, the daring of Greens and Blues racing around the hippodrome, the seemingly invincible walls of Constantinople—but they also know that strength’s eventual failure is as inevitable as it is unexpected. The choir-sung conclusion of “End of an Empire” wonders: “So strong is our faith, the world stays as is, until it hits, like shattering glass to bits. How did this happen? How could this happen? How could the empire fall?” Turisas recognizes that the fight for Constantinople did not end when Sultan Mehmet blasted through its long-standing walls. History is battle—as much a contest between historians as a conversation among them—and Turisas, no less than professors or curators, are its warriors:

History: just what’s agreed, yet it will judge both you and me. Shields and swords will win you wars, but in the end, the battle for our hearts [is] fought by bards.

The author thanks Tyson Strang for contributing his insights to this piece and his energy to the concert.

**Cameron B. Strang** is a Ph.D. candidate in history at the University of Texas at Austin.