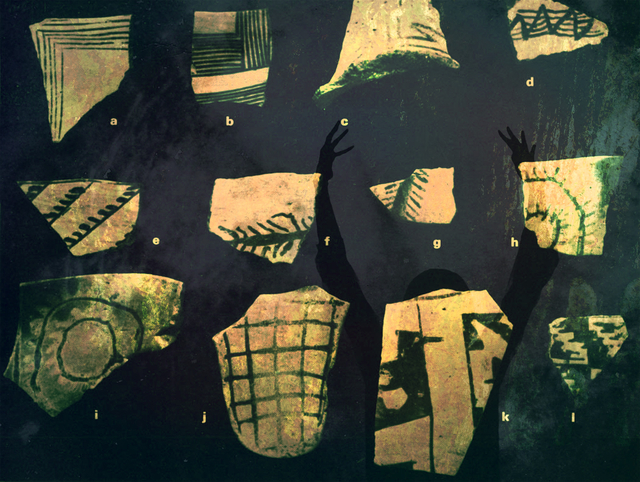 The large, white basin Eleuthera washed up in every evening was an ordinary ironstone piece, probably from the late 19th century. A matching pitcher stood next to it on the dressing table, always full of water. When Eleuthera came in, grimy from the day’s dig, she poured the water into the basin and bent over to splash it on her face and neck. There was no running water in the cabin. This was her only way of washing off the day’s dirt. She was grateful to the landlady for keeping the pitcher full. It was full again in the morning when she woke up, and always as she poured water into the basin she wondered when during the night or early morning the landlady had been in to replenish it. Wonder in the morning and gratitude in the evening—that was how she had begun to think of this job, which had its own rhythm, like any other.

The comings and goings of the landlady weren’t the only mystery. The basin itself, with its crazed surface, put her in mind of the demon bowls that had begun to turn up at auction, pilfered from sites all over Iraq. Some of them bore inscriptions in an ancient language, the characters spiraling out to the edge of the bowl, recognizable as incantations that were anathema to household demons, or else as gibberish inscribed by the illiterate potter, who understood the power of writing to frighten away spirits, even when it said nothing at all. When the bowls were overturned and placed at a corner of the house, it was thought that demons would not enter. Sometimes two identical bowls were cemented together, entrapping a particularly dogged spirit. The ironstone basin had no mate, and Eleuthera wondered, did that mean it never had? Or had the mate been lost and the demon loosed in the world? Every dig seemed to come with its own web of such idle thoughts, items that had wandered into her attention from the news or the Internet or the work itself. Of course the basin was a basin, nothing more.

Sometimes she thought of how fortune tellers filled a basin with water and pretended to look into it and tell the future. Sometimes it reminded her of nothing so much as the place where she was currently working, a valley whose aridity had preserved everything that had ever fallen into it. Their headquarters was located a mile or so from the cabin across a rough terrain, dug down into the earth and shielded from the sun by a canvas awning, which floated a foot or so above the valley floor, so that you never saw it until you were on top of it. When she sat at the specimen table looking out from beneath that awning, feeling the slight breeze that came up in the afternoon, she thought of the basin in the cabin with its worn landscape of cracks. And when she bent over the basin at the end of the day, feeling the cool water on her face, she thought of the valley outside and of the relics it had surrendered to them that day. She was used to this pendular movement of the mind as it swung between ideas.

What put it in her mind to take the basin outside and set it on the ground? Perhaps it was that square chip at the center of it, which resembled the square awning that covered their headquarters. Perhaps not. In any case, she forgot it there, next to her cabin, and drove the jeep to work, and later when she took the basin inside to wash up, she found it now had a leak. The square chip along the bottom was now a decided hole. The water ran out of it before she could bring any of it to her face, wetting the dressing table and spilling onto the floor. The landlady seemed laughably stern when she asked for her help. All the other basins were in use, she told Eleuthera. She would just have to wash up from the pitcher from now on. The cost of the basin would be added to the expedition bill. When Eleuthera explained that she would rather pay for the basin herself, the woman’s face instantly took on a crafty look. She named an exorbitant price, and Eleuthera understood she was paying, not just for the basin, but for the privilege of keeping her own folly a secret from the others.

After that, she washed up out of the pitcher at the end of each day. The landlady continued to fill it and even supplied her with a shabby washcloth she might dip into the water, but it was never the same. She missed leaning over the basin of water, thinking about the future or about everything she had seen that day. The mystery of the pitcher, still full each morning, no longer pleased her.

She kept the basin, having paid a small fortune for it, took it with her when she left the dig, and kept it with her when she left the profession. It was useless, absolutely useless, except as a spur to memory. Its crazed surface brought back the landlady’s face, the arid valley in which she had kept her row of cabins, the shaded place beneath the awning, dug into the cool ground, where Eleuthera had sat with the others brushing the dirt from the shards of broken things.

Long after the basin had ceased to hold water, she imagined filling it and searching in it for another future.

**Michele Stepto** is a writer and teaches at Yale University and the Bread Loaf School of English.