“This is how selves work; they hover / over their border,” writes Molly Brodak. So too do these three elegant, austere, vivid poems hover between past and present.

We at The Appendix were intrigued by Brodak’s oblique poem about the discoverer of microscopy for Guernica, and asked her if she had any other works that might tie in with our “Digs” theme. She wrote back with three poems that brilliantly evoke the past as foreign country. Each of these poems is concerned with a kind of burial—the death of a geologist, the artifacts left by “the people before,” the “romance of bones” at a saint’s tomb. Yet they also hinge on transformations. “Spikes of stars and blank ribbons waving from mouths / across the Apocalypse Tapestry” find new life “as floor mats, horse blankets, frost wrap / for the orange trees,” and “girls’ gold-locked skull parts” are patched with replacements from “mastiffs / and old men.”

In Brodak’s poems, burial becomes transfiguration, and the past is never really put to rest. 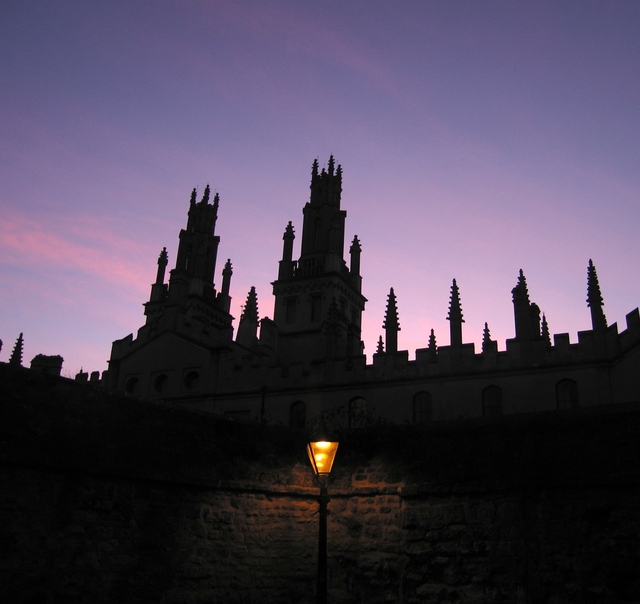 Having turned away from the present, a mood slides over and locks.
A vivid personhood folds him in. A halo as in an eclipse.
Knowledge is funny how it can just eat you up:

having named eras longer than any wholesome human projection,
and compressed extinctions into black threads,
and eaten a nice meal at All Souls College,

(the organ testing its high silver pipes,
thinking of the weird smear of blonde on the nude girl
he’d seen split apart in the operating theater)

John Phillips tumbles down some stone steps and dies,
concussing, his soft body softening further
on the edges of the granite,

erasing, in a way, a fish in reverse,
the special fleshy hope-lumps—no, need-lumps
of this one body peeling in edible sheets,

A bee sticks the young king’s hand for the first time.
Alone on a slope where apples are rotting
under boughs in a sweet acid smell

and he’d like insects to cover him
for the effect it had on the other children. In rain
minnows feel the pond grow.
The barb shot like a spray of grey dimes
on their thin sides looping off in him
like electrons in gel. A sheet of navy blue
dread buckled in his gut. Saw just the face

of a naked woman. An intermittent push of wind
is seen in branches but not felt. Artifacts.
It is true you are sometimes not yourself.

That is how selves work; they hover
over their border. Here death,
atop a green horse, is stitched newly as a corpse

against word-red ground and turquoise brain clouds,
the spikes of stars and blank ribbons waving from mouths
across the Apocalypse Tapestry,

Remember
for yourself. Rifle
around the morphic field.

The people before always leave weapons,
often, accidentally, failures of future-thinking.
And vessels. Unfailing, forever. Below him are vessels,
ceremonial blades of blue-grey hornstone,
unnotched ovate-triangular cache blades,
bone knappers and plummets, axes,
copper awls, celts and points, and vessels,
vessels all the way down. 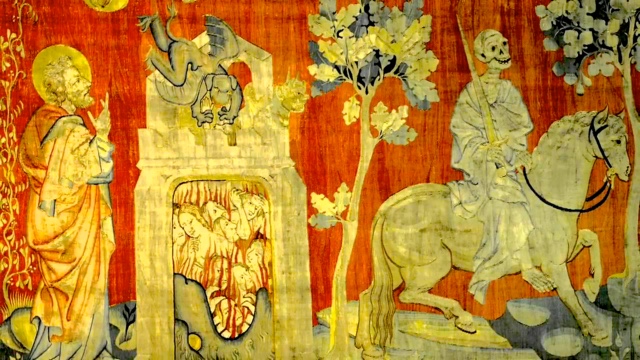 Don’t go to the romance of bones.
It is lazy.

And fake. That joy-crimp in the trunk is pity.
And fake.
A whole trove upturned from a burial ground
under St. Ursula’s,
a jumble matrix of 11,000 virgin martyrs
invented in a small mark

One dim wrong
& buried things are lit.
Regular dead find their fine grey ribs
knit into neat rows above the altar
and their serif-edged femurs spelling
messages to the Virgin Mary,
trimmed in garlands of vertebrae
like fossilized rosebuds:
a wall like a plate to print
sour alms on air.

all capped in velvet ribbons, these silly daydreams.
Unbearable dreams.

And all of heaven made into a small fingerbone.
Small, because we are small.

Big feelings
are handled in tokens.

You hope you are remembering something
when you see it.
Come back
from there.

You’ll never find
the past.

When you do find it,
you’ll see

Not even the you

you still
hope
to meet 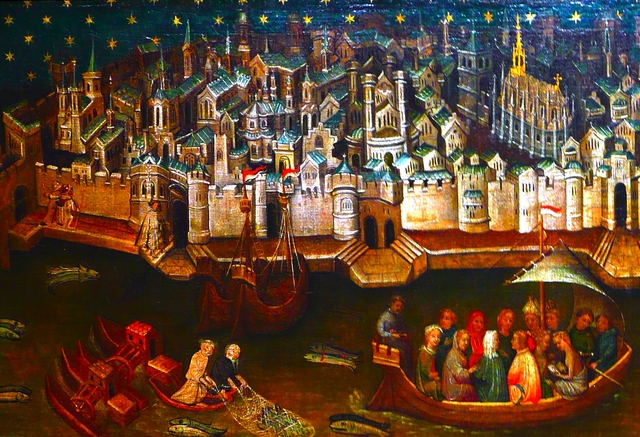 **Molly Brodak** is a poet living in Atlanta.