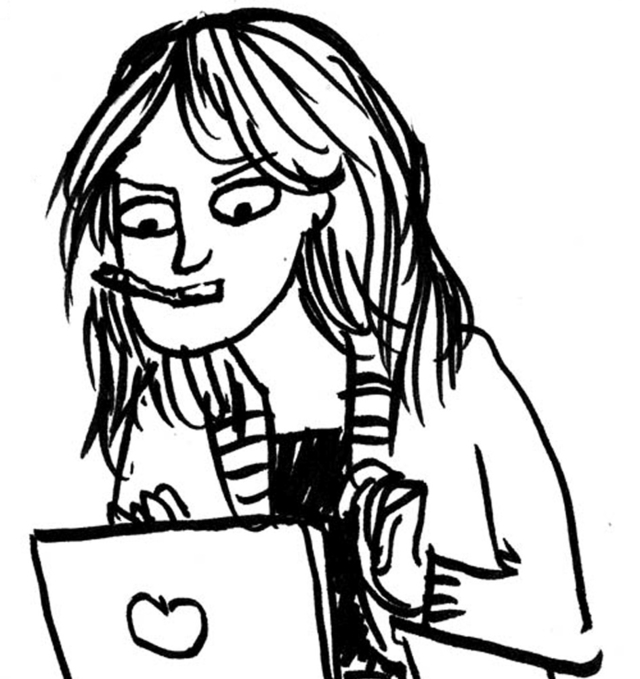 Kate Beaton is a Canadian comic artist whose waggish take on historical and literary figures from Richard III to Ada Lovelace has won cultish acclaim since she started her web comic Hark, a Vagrant in 2007. She is perhaps the only cartoonist ever to be published by both Marvel Comics and The New Yorker. Beaton’s often absurdist, seemingly effortless style is deceiving: her comics’ humor lies in sharply-crafted progressions and punchlines that reimagine the past with barbed wit. Whether she’s revisiting Robinson Crusoe from the perspective of a disgruntled Friday or lampooning the Brontë sisters, Beaton shows her originality as an historical thinker at every turn.

Needless to say, we at The Appendix are big fans. This past October, we talked to Beaton about her inspirations, her early work (“one of the first comics I drew was about going on a date with Admiral Nelson”), and the recent revelation that Oscar Wilde and Walt Whitman probably hooked up.

Interviewer What’s your favorite historical fact or figure that you haven’t worked into a comic yet?

Beaton A lot I suppose! Sometimes you read something and make a note and never get back to it, or you try something for a few days, and know that you have to move on to a new topic because this idea is going nowhere. I would love to make a comic about Ida B. Wells —she’s a hero! But she didn’t have it easy. It’s easier to take down the big blowhards of history with humor, less easy to celebrate the underdogs, unless the joke every time is that they kick everyone’s asses or something.

Interviewer What historical figures seem like they’d make good comics but are in fact impossible to make work?

Beaton Again, I’d say the underdogs. You don’t want to make them look foolish, so you can’t make fun of them really. Or you could, but you don’t want to. But then you can’t always make the joke that everyone else around them is foolish while they are perfect—that gets old fast. Not that our heroes are untouchable, it’s just harder to turn into comedy. But, not impossible.

Also, sometimes when something really outlandish happens, it’s hard to make a comic about it, because it is already funny! And you don’t need to push it, it stands on its own as nutty and unbelievable and funny. It’s easier to make fun of something that takes itself very seriously.

Interviewer You grew up in Mabou, Cape Breton—what’s the local history like there?

Beaton Cape Breton Island is made up of a few distinct cultural populations, but in Mabou and area it’s predominantly people of Highland Scots ancestry, who left Scotland during or after the Clearances. It was an isolated area for a long time, so though I am ninth generation or so, my grandparents’ first language was Gaelic. And we learned it in school, and the signs are English/Gaelic bilingual, though that’s not really necessary now. You are very aware of your own history in Mabou—your family line, where they came from, your relation to anyone in town. And there is a great cultural pride about it—not being Scottish, but being Cape Breton Gaels, is its own thing. I am not descended from great musicians, that is in other families. I used to wish “the music was in us” as they say, but I am descended from local bards, so that fits well enough, since I am a storyteller too in a way.

Interviewer History comics are a small but growing corner of the larger comic book field. How did you get into it, and why do you think it’s getting so popular?

Beaton It’s funny, when I began, people asked how I discovered this “niche.” But, of course, I was just making comics, I didn’t really know anything about comics, and I made what I wanted to make. Is it becoming a thing? I guess that is news to me. More likely, historical topics have always been of interest to storytellers—films, novels, shows. Comics too. Books like Chester Brown’s Louis Riel or Nick Bertozzi’s Lewis and Clark, you know, they’re top notch.

Interviewer You worked at a maritime museum in Victoria—what was that like? Did it end up shaping your comics?

Beaton I miss that museum! Except it couldn’t give me full time. I don’t miss being poor. I was the Admin Assistant, so I was put where I was needed, and got to work a little bit in all the departments. I saw how hard it is to run a museum, and how people put all they have into it, because something is always about to happen that is just going to shut the whole place down. You’re bailing out a sinking ship, but you want to, you’re dedicated to it. You believe in it. I think working in the museums assured me that I believe in the importance of knowing history, and sharing it. It for sure shaped my comics—I worked in three museums in different towns, all told, but I started the website when I was working in Victoria, surrounded by maritime history. I think one of the first comics I drew was about going on a date with Admiral Nelson, and finding out how he was missing a bunch of body parts. Very mature.

Interviewer What was the last great history you read? What are you reading now?

Beaton The last one I read that I thought was a real page-turner was Ian Mortimer’s Time Traveler’s Guide to Medieval England. I was reading a lot of medieval history last year, but some of it was a snooze. It’s not always easy to be engaging. And I recently read a fantastic biography of Roald Dahl, but I don’t know if that counts as a history. I think about Robert Hughes’s The Fatal Shore a lot, and John Keegan’s Soldiers, I’m picking at Joseph J. Ellis’s Founding Brothers, but I’ll be honest, it’s been around the house for ages. I also am way into local history, so if there’s a book about Cape Breton I probably have it. 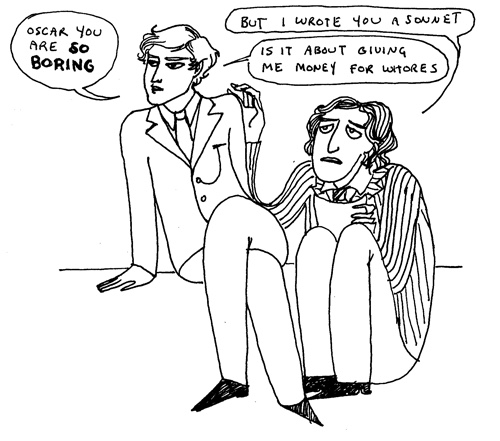 Interviewer Rumors of an Oscar Wilde-Walt Whitman tryst have been swirling recently. (Apparently in 1882 they shared a bottle of elderberry wine and went upstairs to “be on ’thee’ and ‘thou’ terms.’”) That amazing mental image immediately made us think ‘Kate Beaton comic.’ Where do you get ideas for new work? Do you ever avoid a topic because it fits your aesthetic too well?

Beaton Poor Oscar! Things didn’t work out for him in love. I get ideas by wishin’ and a-hopin’. I am always looking at something and hoping that a part of it will be retained and transformed, now or later, into a comic idea. But there are no guarantees—without a doubt, coming up with the idea is the hardest part. I have avoided things where I think ‘Oh, I’ve gone down this road before.’ If it were really funny though, I’d probably go down again. No shame, I got no shame.

Interviewer Do you ever hear from professors or high-school teachers who use your comics in the classroom? How do you balance being educational and being entertaining?

Beaton Oh yes, all the time! That’s the best! It’s so flattering—but I get it, the comics are a good icebreaker. If you are laughing at something, you already like it, and want to know more. If they’re laughing, they’re learning, who doesn’t want to be in on the joke? You can’t take my comics at face value, but you can ask, ‘What’s going on here? What’s this all about?’ Then your teacher gets down to brass tacks. Or you’re an adult, and you consult Wikipedia. I’m just as happy to send people to Wikipedia, even though they don’t always have their facts straight. 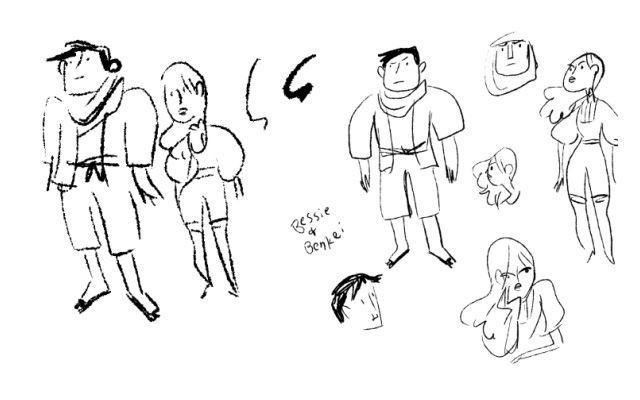 Interviewer What will it take to make that comic about Queen Elizabeth and Benkei the Warrior Monk happen?

Beaton I already started it! I started it and a few things came up and I had to put it on hold, but I’m coming back to it, I love that nutty idea. It makes no sense, and all the sense.