Victor Patricio de Landaluze’s costumed dancer, known as El Ñáñigo, stands silent and still. The viewer almost expects a sudden breeze to ruffle the branches that hang in his right hand or the raffia that circles his ankles, wrists, waist, and neck. 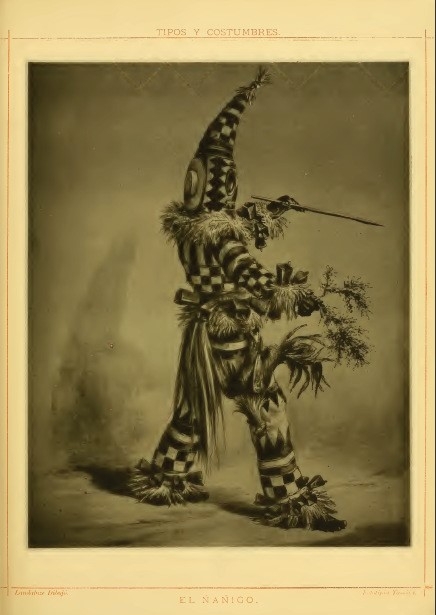 The rigid pose belies how the ñáñigo, also known as an íreme (spirit dancer), vigorously moves during the ceremonies of the Abakuá society, an all-male system of lodges established in 1836 in Cuba, inspired by the “leopard societies” of the Cross River region of Old Calabar. Forty-five years later, the Spanish artist Victor Patricio de Landaluze represented the ñáñigo as part of his volume that cataloged social “types” particular to Cuba. Landaluze’s illustration captures a performative pause.

In ceremonies (and more recently on a public, folkloric stage), the íreme represents ancestors or mythological characters through the use of different suits and objects. The figure performs a visual language of gestures in sharp, angular, staccato movements. The movements at times embody the utterances of the ekué drum. In this way, the ñáñigo acts as a guardian of ritual and as a “spiritual messenger,” according to the art historian David H. Brown.

Íreme of the folkloric group Yoruba Andabo dance in strong, abrupt movements during a performance at a nightclub.

Landaluze’s íreme, however, does none of that. Brown astutely notes that Landaluze’s realism “disciplined the bodies and gestures of the íreme through classical figuration and the views he offered to beholders.” He compares the dynamic counterpoint of the íreme’s performed gestures to the balanced stasis the viewer encounters in Landaluze’s rendition–more akin to the classical statuary of a Greek Zeus than what might be observed when the íreme dances.

The lithograph of the ñáñigo appeared as part of Landaluze’s Tipos y Costumbres de la Isla de Cuba (Types and Customs of the Island of Cuba) from 1881. The volume details in costumbrist fashion, via text and image, the various social “types” to be found on the island. Landaluze also illustrates the figures of the cockfighter, the cigar maker, the country peasants, the “mulata of the street,” and the lottery ticket vendor, among others. Costumbrist works in Europe and Latin America, through their construction of social types, contributed to the formation of a national identity, according to May-Yen Moriuchi. However, foreign artists who completed costumbrist works often exoticized their subjects. 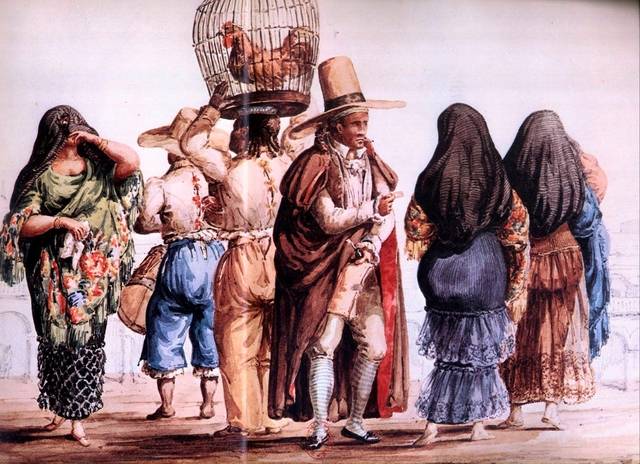 Preparations for a cockfight as depicted by another “costumbrist” artist, Leonce Angrand, in 1854. Bibliotheque Nationale de France

Importantly, though, Landaluze’s placement of the ñáñigo in an unidentifiable location separates him from the social body. The other types in the volume appear with others or in their usual surroundings, like the country peasants in front of their thatched roof home amidst the palm trees of the Cuban countryside. 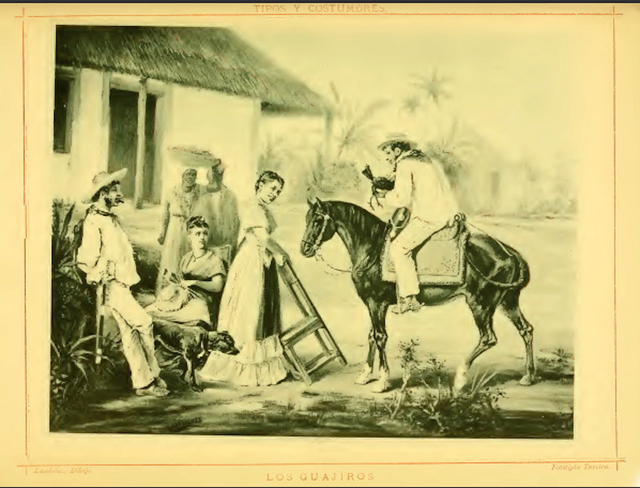 Landaluze isolates the figure of the ñáñigo, in turn, to emphasize the control of a highly criminalized body. In the late nineteenth century, the Spanish colonial government persecuted Abakuá members as the end of the slave trade loomed near. Abakuá’s association with murder and fear continued into the twentieth century. Abakuá was a plague on society, and Abakuá members “the bogeyman of Cuban history,” in Ivor Miller’s words.

The art historian Evelyn Ramos also points out that Landaluze, in his late work after the 1870s, increased his representation of Cubans of African descent. She characterizes these images as constructions of a kind of “black savagery” specifically linked to the multi-racial insurgent movement taking shape in eastern Cuba. In this sense, “Landaluze’s images suggest that the communion of white and black soldiers on the field was leading down a path of social miscegenation and disorder.”

When Landaluze does depict the ñáñigo in the midst of the social body, he places the figure in “appropriate” spaces. In a carnival scene from the late nineteenth century, the ñáñigo, in black and white costume, gestures in close proximity to two mulata women. 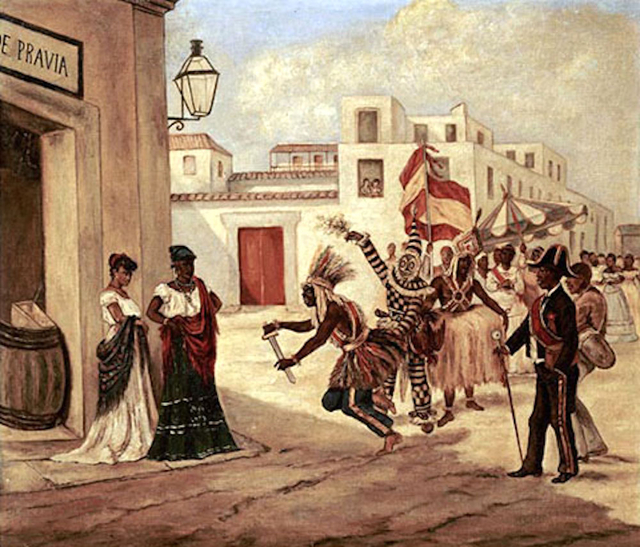 In the (white) elite configuration of colonial space, the street was the domain of free men and women of color and the enslaved. The Countess of Merlin (María de las Mercedes Santa Cruz y Montalvo), a white woman born in Havana who left to live in Spain, writes in her 1844 travelogue that white women ventured into public very little. “Only black women,” she observes, “walk everywhere with their shoulders and chests uncovered, with a cigarette in their mouths, leaving trails of smoke.” In another street scene, the ñañigo spreads his arms before a trio of women in a window. A black servant, probably a slave, stands behind a white woman and her child as they watch, all safely out of reach in their home. 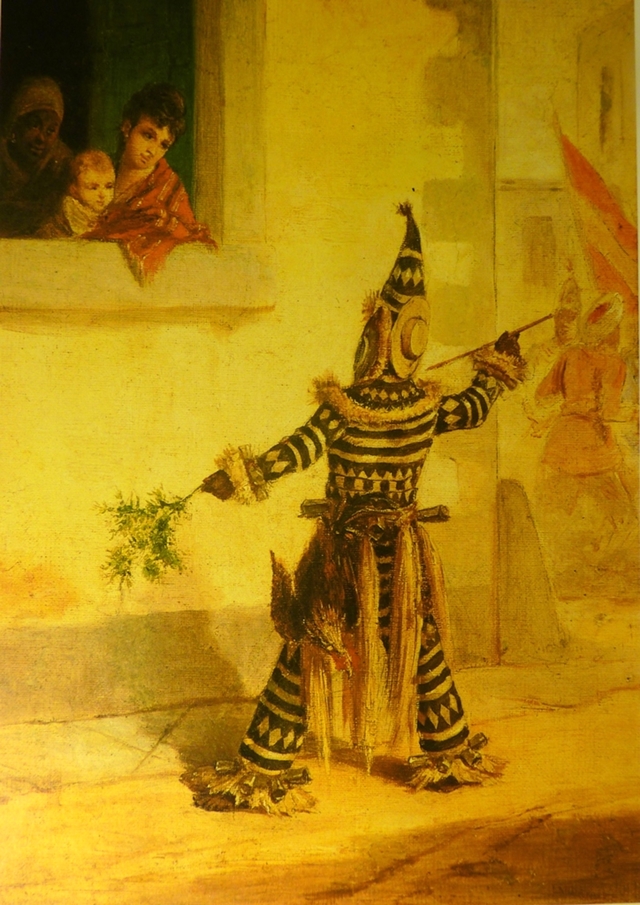 Yet, Landaluze’s isolation of the ñáñigo in the Tipos image–an emphatic separation from society—foregrounds his attention to detail in the spectacular rendering of the suit and mask. Paradoxically, Landaluze’s abstraction of the figure urges us to examine these details. Our eye moves through the rhythm of the strong diagonal, vertical, and horizontal lines of the suit’s checkered and striped pattern. We stop at the ñáñigo’s ankles, wrists, and waist where raffia and bells sprout forth. From a dark hole, the dancer looks in the direction of the stick pointed in his left hand. The fronds and rooster’s feathers, hanging from his waist, augment the actual size of the figure along with the point of his mask–further embellished by the shadow on the wall.

Landaluze’s attention to detail has led some scholars and historians to read the image for its value as an ethnographic document. Indeed, Ivor Miller, in his work with contemporary titleholders of Calabar Ékpè (leopard) societies, suggests that the suit’s patterns represent the spots of a leopard associated with a particular grade in the society. He also cites the vertical nature of the mask as an important symbol of the “enlightened state” of the grade. However, applying the reading of contemporary titleholders in Africa to the image overlooks the possibility of new meanings assigned to the pattern of the suit in colonial Cuba. David Brown, in contrast, offers that the suit may have been modeled after a masquerade known as Embema, a royal figure associated with the forest.

The static and isolated figure invites contemplation of the suit’s pattern and possible meanings. Can we also read his stance as coded gesture for Abakuá members in 1881? We wonder, but the moment of stillness suggests imminent movement. Our observation escapes us–we wait for the íreme to move and break his stance. We wait for the bells to sound.